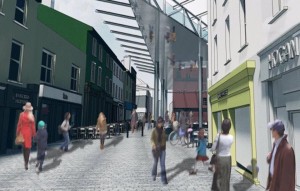 The roofing of the Apple Market will form part of the agreed Urban Renewal Plan.

Michael Street shopping centre to form part of €10m renewal plan
The development of the Michael Street retail project represents a case of ‘when’ rather than ‘if’, City & County Chief Executive Michael Walsh confirmed at last Thursday’s plenary Council meeting in Dungarvan.
Speaking after Councillors unanimously green-lit the €10 million City Centre Urban Renewal Scheme via the Part VIII planning process, Mr Walsh said the Council’s intent on delivering the new centre couldn’t be clearer.
Replying to queries from Cllrs Mary Roche and Cha O’Neill (Ind), Michael Walsh told the meeting: “In terms of the shopping centre itself, it’s very clear where we are in terms of the process…there will be a planning application lodged in January in respect of the shopping centre…and I would emphasise that, regardless of anything else, it’s not a question of if the Michael Street shopping centre will happen, it’s only a question of when. That’s absolutely the case.”
Mr Walsh added: “I think we need to separate the Michael Street shopping centre from (this plan) in some respects because the vast majority (of works detailed in the plan) aren’t directly related to it.
“We need to upgrade John Street, the link to Hennessy’s Road and Ballybricken and the upper town in some respects will be very positive for the city, so there are definite advantages in going ahead with this (project).”
Mr Walsh said the project would also address the greater urban renewal picture for the city centre, which acted as a firm rebuttal to those who have criticised the authority given the perceived overemphasis on the Viking Triangle in recent years.
And he assured Cllr James Tobin (FF) that the investment would not detract from the more rural-based plans that the Council has in store for our smaller towns, villages and their hinterlands.
Mr Walsh assured Cllr Eddie Mulligan (FF) that the works entailed that will affect the Parnell Street area will not be addressed until the Waterside Car Park is up and running.
The CEO added, with respect to the development of one-way systems outlined in the plan, including Bunker’s (Manor) Hill that “nothing has to be entirely built in stone”.
“There is no reason that the Bunker’s Hill proposal can’t be varied or modified at any stage in the future…it is, in its essence, only a set of traffic lights that we can turn one way or the other in terms of traffic flows…we won’t keep a closed mind on that basis, but we’ve confident that the overall strategy is right.”
City & County Mayor John Cummins welcomed the scheme, which he said formed the end product of “significant consultation” between the Executive, Councillors and the general public.
“I’m delighted that we’re in a position to expend almost €10m on what is an extensive programme of regeneration for the city, to our public realm spaces, including certain unique features, such as the roofing of the Apple Market and making access to and from the city easier.”
The project will be funded by €4m of City & County Council funding, a matching €4m from the European Regional Development Fund (ERDF) and just under €2m from central government.
It’s expected that the project shall take between two and three years to complete, with the Council Executive expected to bring a programme of scheduled works before Councillors in either January or February next.
The project makes provision for the open sided glass and stainless steel roofing of the Apple Market, a new urban plaza at Arundel Square and a range of traffic alterations and upgrades at the following locations: Arundel Square, Cork Road, Browns Lane, Mayor’s Walk, Patrick St, Stephen St, Bachelors Walk, Peter St, Bakehouse Lane, Lady Lane, Castle St, Railway Square, Manor St, Bath St, Manor Hill, Convent Hill, John St, Apple Market, Olaf St, St Francis Place, Michael St, Henrietta St and Bailey’s New St.
Councillors held three workshop meetings on the City Centre Renewal Scheme prior to last Thursday’s vote, which ran to between seven and eight hours in total.
A total of 76 public submissions were received by the Council during the prescribed consultation period for the proposal, which concluded on August 11th.
Welcoming the vote, Minister of State Paudie Coffey said the scheme shall transform the Apple Market area into “a real hub for pedestrians which will help increase footfall in the heart of the city centre”.
“Now that this project is due to begin, we must focus on future developments in the city. That is why I am committed to the regeneration of the North Quays in Waterford City and it is why I fought so hard to get this project in the Government’s Capital Plan (2016-2021)…which has the potential to be a game-changer for our city.”