THE Minister for Justice has rejected claims by a local Councillor that the revamped and extended Waterford Courthouse is the “wrong project in the wrong place at the wrong time.”
The new look Waterford Courthouse was officially opened last week by Minister for Justice Charlie Flanagan at a ceremony also attended by Chief Justice of Ireland Mr Frank Clarke, Senator Paudie Coffey, local Councillors, members of An Garda Síochána and many from the legal profession.
The €26m project incorporates parts of the original courthouse which dates back to 1849 when it was designed by J B Keane.
Waterford is the fifth new or refurbished courthouse to be opened by the Minister in recent months following Drogheda, Letterkenny, Wexford and Limerick.
However, Cllr Joe Conway (Ind) has described the project as “unnecessary”. 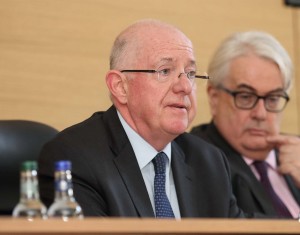 “The cost of the Waterford Court extension would have been much better spent on addressing the critical shortage of housing in the city and county,” he said.
“In my time as a Councillor, not a single person has ever come to me demanding more courts for Waterford. But I will tell you what I am asked about every single day by our people – some of them in real distress – and that is…where am I to get a house in which I can rear my family?”
The Tramore based Councillor highlighted the current lengthy waiting list for housing in Waterford.
“In this city and county, we have 1,444 applicants on the waiting list, and over 2,000 tenants in HAP agreements with private landlords,” he said.
“Since the start of 2017, we have brought on stream a mere 82 houses, three quarters of which are turnkey units delivered by private contracts. Those figures show clearly just how bleak the situation is here – and is replicated up and down the country.”
He continued: “I have cases of families, some in extraordinarily straitened circumstances and on the list for upwards of seven years, with special needs children, and they have not a prayer of getting housed in Tramore – where all their extended families and supports are. They are in dire need. And, in the midst of this housing crisis, we as a nation see a need to divert more than €22m to pretty up a courthouse. The figure is closer to €150m nationwide. It is risible.”
He claims the cost of the courthouse would have provided around 150 houses for Waterford families – and that would still address only about ten per cent of the housing list.
“It was not a case that the courthouse was decrepit or inadequate – it was perfectly fit for purpose,” he said.
“I have discussed this with some local lawyers with decades of practice in the area, and they averred to me that there was no need whatever for this expense. When so many of our people are in need of a home for their family, it is unconscionable to spend vast sums of money on what amounts to little more than a scatter of vanity projects.”
However, speaking at the official opening of the courthouse, Minister Charlie Flanagan rejected Cllr Conway’s claims.
“It is essential in any modern democracy that we provide space and facilities for people in the course of justice issues and I make no apologies for that,” he said.
Minister Flanagan acknowledged that “choices” must be made when it comes to government spending.
“My colleague Eoin Murphy will ensure that the house building needs of the people of Waterford are dealt with in due course,” he said.
He also acknowledged that Waterford and the South-East have faced significant issues including unemployment.
“I’m very pleased that, in conjunction with my colleagues Deputy John Deasy and Senator Paudie Coffey, that the needs of the South-East and Waterford are very well represented,” he said.
“From my perspective, the provision of this courthouse facility at a cost of over €22m will be matched in my department by ensuring we have adequate numbers of Gardaí and that they are equipped to meet the needs of the people here in fighting crime.”