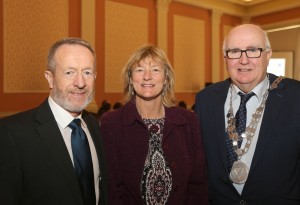 Said Sean Kelly: “This is the fourth public event I have held on the European Fund for Strategic Investments (EFSI), so that people can get information first-hand on the funding available from Europe, particularly the €500 billion from (the) EFSI. The information presented by top-class speakers is invaluable but equally important is the networking and contacts made so businesses and stakeholders can follow through with questions and plans subsequent to the discussions.”
He added: “It is important that all regions in Ireland are equally recognised. Waterford and its environs has wonderful potential and I have no doubt that today’s presentations will help to create the appetite and opportunity to finance many future projects which will boost the economy and foster job growth. Of particular interest in this regard was Katherine Collins’ presentation on the delivery of the Waterford Cultural Quarter and the role of creative enterprises.”
Speakers at the event announced how Waterford has already benefitted from various European Investment bank funds such as the Primary Care Centres at UHW. Social housing will be one of the areas for investment, transport and infrastructure.
It was noted afterwards that the Dublin Institute of Technology got huge funds for the Gormanstown Campus and could similar funds be allocated to the new South East
University campuses .in the 2040 plan.Following the crash of 2007/8, investment was slashed in Ireland, now it is catch up time as so little was done in over a decade noted EU official Pat O’Donovan, who is based in Dublin.Cormac Murphy gave some background to the EIB and how they are not starting to fund local authorities. Recent major examples were Limerick for their river side renewal plans and Fingal, near Dublin. The Limerick 2030 plan will be funded to the €85m.
Waterford Mayor Pat Nugent earlier spoke at the event and how the North Quays plan was coming to fruition and that it would rejuvenate Waterford.
This follows on from other successes such as the Greenway which has run up 500,000 visitors in its first year alone.The Limerick port example is a good one for Waterford as it plans to develop the North Quays; Rob Cass of Al Hokair was also in attendance and spoke positively.Fingal, near Dublin city, offers another example for us here. The council there has got EIB funding for many projects ranging from culture and heritage investments in local parks, public transport, health care and primary care centres.
The EIB can invest in social housing in this expanding local authority on the North side of Dublin up to Dublin Airport and Swords, where they have had much population expansion. Waterford could also get these funds.
The EIB could invest substantially noted Cormac Murphy of the Euro investment bank in bringing affordable housing to Ireland and has earmarked loans of €205m out of €405m committed by the Department of Housing run by Eoghan Murphy.Bringing its capability as a financier can help make things happen.
Other examples given were that of the N11 from Wexford to Dublin and the N25, with a new bridge near New Ross connecting to the N11, not far from Waterford, offering an alternative route to South East Dublin.National Broadband is another target area for investment with the emphasis on rural areas, with Eir, where high speed fibre will be put in: this is a cross-Europe objective.
Finance Technology business or Fin Tech is another focus area for jobs and investment.The EIB have dealt with hundreds of projects, supported and approved in their process.They also do high risk loans that may not be done otherwise with co funding from across Europe.Brexit will also see some funding for small business with Enterprise Ireland and Irish banks with a focus on the agri-food sector that maybe most affected. Flood prevention will be another area of focus with local authorities. School investment with public private partnerships has also received EIB funds.Businesses are also getting EU funds for Research and Expansions. There is also a programme where investors from Germany or other Euro countries are matched up with promoters of a business project and this could bring in money from places.
It all points to EU and investment backing for major capital investments and Waterford with the south east will benefit – but it’s up to the local authority, the public and private sector to come up with the correct plans.
Paul Cleere of AIB also spoke for their funding options and Nick Ashmore of the Strategic Banking Corporation went through the Brexit Finance Scheme, along with the COSME facility for small firms and innovation funds. Another speaker was that of Katherine Collins, project manager of the O’Connell Street Cultural Quarter (we’ll have more on this in next week’s edition).