The prospect of major shows and concerts at the WIT Arena remains a live prospect, according to the Institute’s Vice President for Strategy.
“I’m out there every day and activity is increasing on a daily basis,” he said.
“There have been all manner of events and activities held at the Arena since it opened and while I’m not au fait with the specifics of discussions with promoters, acts and so on, it’s clear to anyone who’s been out there that the Arena that it’s becoming a considerable centre of activity in the South East and can, in time, become an economic driver in its own right. What we’ve got in place now is comparable to any other third level institute in the country and that’s something we’re all very proud of.”
While the building’s long-awaited completion arose as the national economic picture was improving, Richard Hayes said WIT has always prided itself on its tradition of “innovation and mould-breaking”. 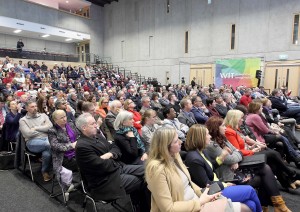 He added: “We’ve a long-standing and proven entrepreneurial spirit in terms of getting out there and making things happen, which is a tribute to all of the former presidents of WIT, all the way up to current President, Willie Donnelly. We want to make things happen and the Arena is a prime example that, even within the WIT community, I think we underestimated the impact it would have on the wider South East community. We can at times be guilty of navel gazing in the college and view the development of certain levels of infrastructure as being just about us, but when you actually go out there, the least amount of people who are passing through the Arena on a daily basis are from WIT; it is already primarily a community facility being used by both the local and wider regional community, particularly when it comes to sports clubs, and we also have tourists coming through it now given the proximity of the Greenway. In very little time at all, the Arena has become a fabulous facility and has already proven a massive success for both the city and region, in addition to WIT.”
Meanwhile, Dr Hayes doesn’t foresee WIT developing any multi-storey buildings in excess of the current heights already in place on the Cork Road campus. “We have a very good and long-standing relationship with local residents, and we don’t want to be upsetting residents by expanding buildings to a height that we’d be creating shadows over houses,” he added. “I’ve no idea what the planning restrictions might be and I don’t know how feasible it would be to build on anything else there. The original RTC building from 1969 has probably gone as high as it can go. We don’t have a culture of building up in Ireland and I don’t think it’s likely that we’ll be going down that route.”