The eagerly anticipated New Ross Bridge and N25 Bypass will open at a yet to be determined date in 2020, rather than this summer, as had been previously anticipated.The news, disclosed to South Kilkenny Councillors at the February meeting of the Piltown Municipal District, was not greeted with any palpable sense of disappointment on members’ behalves. As late as last September, Councillors had been told that the project was due to open by June of this year. 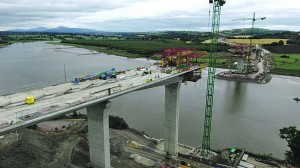 Progress on the €230 million project, which encompasses a 14-kilometre dual carriageway, new sections of both the N25 and N30 and a three tower, 900-metre extrados bridge between Pink Point and Strokestown, has proceeded on schedule.
The opening of the new N25 Glenmore Roundabout, the access point to the new bypass from South Kilkenny, has been welcomed by locals, motorists and hauliers alike. Signage is now in place on the roundabout, with its wording and read outs currently concealed, with the signage plan for the Bypass approved over a year ago.
The design and construction of the project is the result of a joint venture (via the Public Private Partnership model) by BAM Civil Ltd and Dragados Ireland, simply titled New Ross Joint Venture (NRJV). To date, such joint ventures have delivered over 75 kilometres of national and regional roads across the State.