New Ross Bypass Ahead of Schedule

Work on the €230 million N25 New Ross Bypass is ahead of schedule, with the new road and bridge due to be fully open by June of next year.
At last Wednesday’s Piltown Municipal District meeting, Kilkenny County Council Director of Services Sean McKeown dispelled local concerns about progress levels on the project, which had been relayed to residents by Glenmore-based Councillor Fidelis Doherty (FG).Noting those concerns which he said would be relayed to the contractor, Mr McKeown confirmed that the design/construction phase of the project was “approximately three quarters complete”. 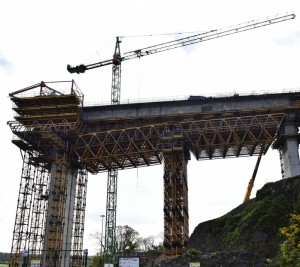 The New Ross Bypass is one of the South East's largest ever infrastructural projects. | Photo: Joe Cashin

In the latest circular issued to Councillors, the “construction of the main spans from (the river pier) with four segments cast on each side of the pier using ‘form travellers’. These travellers move out incrementally from the pier in opposite directions and progressively cast the (road) deck segment by segment. A similar traveller at pier 5 is now fully assembled…The bridge desk on all three support spans on the western (Kilkenny) side are substantially complete, while the central box for the first span (span 6) on the eastern (Wexford) side is continuing to progress. Temporary falsework is being erected on span 7 to support the construction of the bridge deck for this span.”
The full roundabout is still operating on the N25 at Glenmore, while a “further temporary traffic management layout became operational in August to facilitate finishing works”. Final surface works on the roundabout approaches are due to be completed this month. Meanwhile the overbridge at Ballyverneen and the Glenmore Road underbridge are “both nearing completion which will allow the respective local roads to re-open”. Pavement works are now over 40 per cent complete with final surface work set to “proceed over the coming months”.