Kieran Walsh reports
The National Federation of Retail Newsagents (NFRN )Ireland celebrated their centenary year on March 21st with a gala evening held in The Ferrycarrig Hotel, Wexford. The event was hosted by District President Peter Steemers from Bunclody.
A great night was had, with retailers and trade partners attending the event Following a nomination for a newspaper award last year, The Munster Express attended this special event. 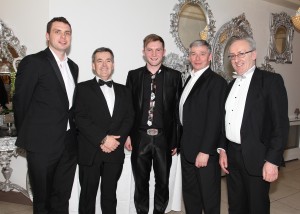 Peter Steemers spoke about how the association began back in 1916 and noted the current challenging times for the sector, along with the symbiotic relationship between news trade and news retailers.
Guest speaker was Frank Mulrennan, CEO of Celtic Media, also from Bunclody and a former school friend of Peter Steemers.
He noted how the first meeting of the association was in Mullingar and this was reported in the local paper the Westmeath Examiner.
NFRN would become a strong association from 1919 onwards and now has 1500 members across the UK and Ireland.
After the 1916 rebellion there was a huge demand for papers as they had been off the streets for a week. In fact, Thomas Clarke was a tobacconist and newsagent on Parnell Street.
Papers were often delivered by rail from Dublin in those times and the local newspapers were avidly read.
In attendance at the event from Tramore were Peter McNally and his wife from the Daybreak shop, Newtown, Mr Galloway who was representing sponsors JTI and Nicky McGrath from NFRN, who got a special mention for his expertise on the organisational front. Music for the event was provided by Waterford band Brass & Co.