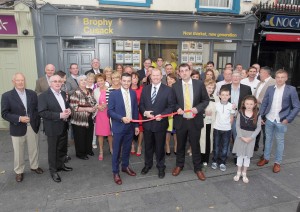 Minister of State at the Dept. of the Environment, Paudie Coffey TD pictured cutting the tape at the opening of Brophy Cusack on Friday last.

BROPHY Cusack, Waterford’s newest auctioneers, was officially opened last Friday September 4th.
The young and proactive team at Brophy Cusack located at 7 The Mall in The Viking Triangle, offer a superior service based on innovation, integrity and hard work.
Combining practical experience with educational qualifications, Carrick-on-Suir natives Jeffrey Brophy and David Cusack (who are both members of IPAV) are committed to understanding and exceeding their client’s expectations.
Despite his young age, Jeffrey, son of well-known property developer the late Martin Brophy, has already amassed vast experience.
He obtained a BSc in Construction Economics from Waterford Institute of Technology (WIT) and a BSc in Quantity Surveying from Edinburgh Napier University.
After working as a quantity surveyor, he returned to Edinburgh Napier University where he obtained his Master’s in Property Management & Investment Property.
He has spent time working at Michael Guiry Auctioneers in Waterford and also with DNG in Dublin.
David Cusack, nephew of well-known local businessman Liam Cusack of The Granville Hotel, joined Michael Guiry Auctioneers in 2012.
During this time, he studied at the Institute of Professional Auctioneers and Valuers (IPAV) in Dublin and obtained a degree in Real Estate.
David and Jeffrey developed a close working relationship while at Michael Guiry Auctioneers, and decided to branch out themselves.
Both men say that they identified an opening in the market and believe that the property scene in Waterford and the South-East has improved.
The Brophy Cusack slogan ‘New Market, New Generation’ reflects the changes in the market which they are observing.
While the market was predominantly dominated by rentals in the recent past, they say that the sales market has re-opened significantly.
They have noted a particular improvement in the first time buyers’ market.
Brophy Cusack operates across the entire South-East region, covering a large catchment area and combining state of the art e-marketing with the best traditional estate agency methods.
Working alongside David and Jeffrey is Office & Accounts Manager Ruth Flynn QFA, wife of former Waterford hurling star Paul Flynn.
Ruth brings significant experience and contacts to the Brophy Cusack team, having worked at Bank of Scotland and ACC Bank.
Minister of State at the Department of the Environment with Special Responsibility for Housing, Planning and Coordination of the Construction 2020 Strategy, Paudie Coffey, performed the official opening last Friday, has wished Brophy Cusack the very best of luck.
“I welcome the opening of Brophy Cusack and the decision of two young professionals to invest their expertise and future in Waterford and the South East region,” he said.
“Waterford City is definitely a city that is re-inventing itself and transforming from a traditional manufacturing base to a modern sustainable city with Hi Tech jobs in life sciences, biopharma, medical devices and IT services and innovation – this is reflected in companies such as EirGen Pharma, Genzyme, Teva, Nypro, Eishtec, Sunlife, Tech Mahindra, Bausch & Lomb, Honeywell. This further leads to demand for quality residential development and Waterford is now beginning to see strong signs of growth and revitalisation again. Quality of life and infrastructure are important factors in attracting Foreign direct Investment and Waterford and the South East has this in spades.”
Both Jeffrey and David have thanked everyone who has helped them along the way with their new venture.
The team at Brophy Cusack will provided hands-on support and advice and an unrivalled knowledge of the local market along with regular client contact and updates, ensuring you have a first class service every step of the way.
For more information, call 051-511333, email info@brophycusack.ie or visit www.brophycusack.ie.