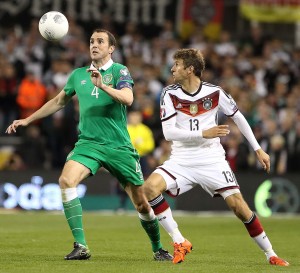 Ferrybank native John O’Shea has been named in a Sunday Times report which states he’s among a group of English-based footballers facing financial losses having invested in ventures ‘recommended by two financial advisers operating at the heart of the national game’.
On a front page story titled ‘Footballers in financial meltdown’, the report reveals that O’Shea, is among a group of over 100 British-based players who were advised by David McKee and Kevin McMenamin “whose firm Kingsbridge Asset Management earned more than £5m in commission on the players’ investments before they tanked or the footballers were hit with tax demands after HM Revenue & Customs (HMRC) challenged the film schemes”.
These ‘film schemes’, according to the ‘ST’, “involved footballers putting in some of their own money – which was then supplemented several times over with huge loans from banks, including Coutts (the private bank which provides services for the British Royal family). These investments then generated tax rebates for the players. Some of this money was invested in property schemes that subsequently failed.”
The three-page report published last weekend was based on an extensive range of correspondence leaked to The Sunday Times, which suggests that the players caught up in the controversy may have lost a estimated combined total of €140 million.
On the playing front, it looks as if O’Shea, suspended for the first leg of Ireland’s Euro 2016 play-off against Bosnia, is unlikely to feature in next Monday night’s second leg in Dublin after suffering a recurrence of a recent hamstring problem.
“He’s not been able to get fit for us in two weeks, so he is not going to get fit with a hamstring in 10 days,” said Sunderland manager Sam Allardyce, after O’Shea had to withdraw from his team’s starting XI to face Southampton on Saturday last.
“Sadly for us today, he was missing and sadly for (Ireland). He got through training all right (on Friday) and was selected to play, but felt it this (Saturday) morning, so we took him out.”