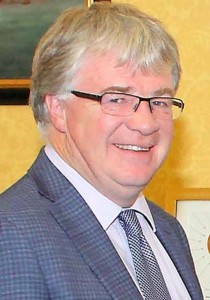 The prospect of City & County Council tenants facing a rent increase next year was effectively ruled out by Council Chief Executive Michael Walsh at a Metropolitan Area Budget meeting held on Thursday last.
This move was indicated in the 2016 estimate of income and expenditure issued to Councillors prior to Thursday’s meeting, in which next year’s estimated rental income of €11,772,500 matched the figure set to be drawn in by the Council by the end of this year.
Addressing Councillors at City Hall, Mr Walsh said a ‘steady as you go’ approach was particularly prudent at this time, and he didn’t foresee rental charges increasing next year as part of the Council’s immediate financial plan.
Responding to a query from Cllr John Hearne (SF), Mr Walsh said “our intention is not to increase rent,” but added that the Council intends to align rent across the City and County.
On the matter of tent, Cllr Hearne feels the limiting of rent increases to two years, as revealed by the Government last Friday is “only delaying a problem and doesn’t address the fact that many tenants will have their rent increased before these rules are in place.”
Cllr Hearne added: “We urgently need real rent control measures which will set standard rates for size and location of accommodation. This will empower existing tenants to lower their rents through their right to review rent while forcing landlords to set fair rents on new leases.
“We must also limit rent changes to the rate of inflation and the consumer price index to ensure affordability and stability into the future. Access to affordable housing is too important to leave unregulated.”
Meanwhile, Mr Walsh recommended “very clearly” to Councillors that Council-set charges should not be varied at present.
“I think we have done a reasonably good job and are in a far better financial position in general terms and I feel we have a reasonable level of service on the ground, but there are a few areas in which I would like it to be better…but that is entirely at the discretion of Councillors,” he added.
Mr Walsh said the delivery of “real and serious reductions in rates”, primarily in the Metropolitan Area, was something he felt the City & County Council Executive hadn’t received enough credit for.
“Rates are down about 20 per cent for the vast majority of people; we’ve done that, it’s affected our income but it has definitely delivered in terms of economic delivery on the ground and I do feel that we haven’t got a great deal of credit for that…
“We delivered a really serious win in terms of cost for the community and for ordinary business of both little and large in scale and in the context of trying to reduce charges, we have striven to maintain our level of services, be it in roads or houses, the many different things we are involved in, going as best we can.”
Michael Walsh re-iterated his commitment to the North Quay, Michael Street and Tramore urban renewal projects, adding that “our capacity to invest is dependant on retaining income – and on the whole, I feel we’re in a reasonable place..
“We can see signs of economic recovery; and there are signs of stabilisation in our income, which has only occurred in the past year or two…but I’d be happy enough that over the next few years, as part of a reasonable economic recovery at national level that we will gradually come into a place whereby our income should come into some form of positivity over the next two to three years.”