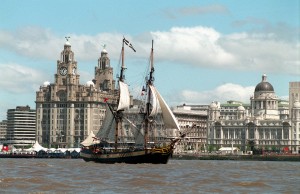 Liverpool has benefited from the European Capital of Culture status staged in 2008.