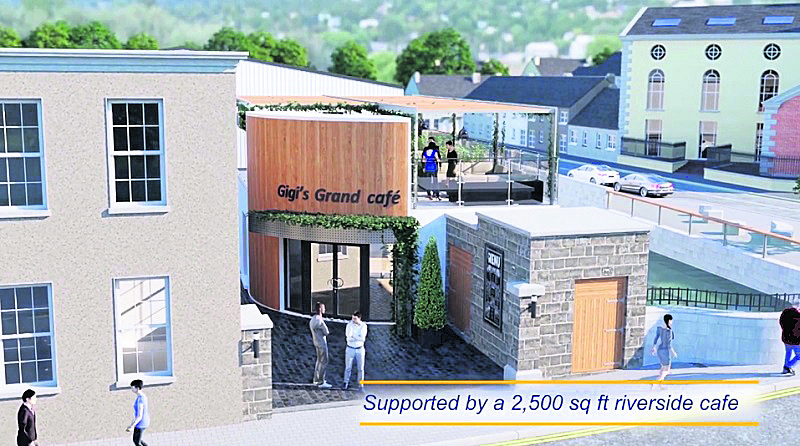 New office space to have 120 workstations and riverside cafe

A Waterford pharmacy director has unveiled his plans for a 12-thousand-square-foot co-working space which he hopes can ‘retain talented young professionals’ in the city post-Covid.

Ronan Mulligan, whose Mulligans Pharmacy chain employs 200 people across the South East, has acquired planning permission for the ‘Riverspace’ development which is projected to host 120 co- working spaces as well as a cafe. Overlooking John’s River at its location on South Parade between the People’s Park and Waterside, it will also host a 2,500-square-foot café.

The complex will hold a 2,500-square-foot cafe overlooking John’s River.

It previously was the site of the former Intacta Print Unit and was bought by the Mulligan Pharmacy Group in recent years for administration and warehousing. Mulligan, who is managing director of the group, told the Munster Express that he hopes it will serve a “neglected part of the city” and be able to be an option for the city’s legal profession – many of whom are based nearby on Catherine Street along with the Court House.

“The digitalisation of the economy is happening much faster than we thought,” Mulligan said.

“The grocery business is at its 2024 targets now with adapting to e-comm. A lot of jobs are going to be sucked out because of that but there will be ways to adapt and this is part of trying to reimagine the workplace. There’s already people doing this in Waterford and elsewhere, like Boxworks and Fumbally and WeWork, so the hope here is to try and gear it towards high quality professionals.”

He added that he wants to provide an option to “young people so that instead of going to Dublin and paying twice as much” they can stay in the region. In line with this, he believes companies will have to meet employees’ desires to work from home more when the pandemic ends.

“If the employers don’t work with these people then the talent will go elsewhere.”

Fewer, Harrington & Partners are the design team for the project. Funding is still to be acquired, with a key factor in determining the cost being the model used for the co-working space. Options include a membership model or renting, according to Mulligan. 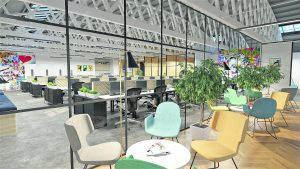 The space will hold 120 workstations.

“The economics around it are still being worked on. It’s not just building an office and renting it out, there are other ways of doing it.”

The idea came while Mulligan was strolling through the site. While the warehousing and administration side of the pharmacy chain was taking up space at the unit, there was almost 16-thousand-square-foot going unused.

“It was funny, I could hear my late father’s [Jim Mulligan] voice in my head while looking at the site. He’d say, ‘This is all very well but there’s nothing going in the till’. I decided from there to try and do more with the site.”

Talks are ongoing with technology companies for the office space. It’s planned that the cafe will be built initially as the demand is “definitely” there for it in the South Parade area. Mulligan also reckons that the nearby amenities makes it an ideal location, with the People’s Park, the Waterside car park and a number of schools nearby:

“There’s not enough in the area for people so this will meet a demand I think, but also that park is so important to people’s lives. The past year with Covid has shown that.”