Signs of Life for Ferrybank Centre

The interior of the Ferrybank Centre has been significantly reconfigured over the past year in an effort to put one of the region’s most prominent Celtic Tiger ‘white elephants’ into viable commercial use. The latest update provided to Piltown Municipal District Councillors by Kilkenny County Council has boosted hopes that sections of the vast building will finally gain a commercial function some nine years after its completion. 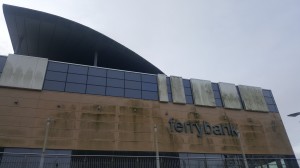 The increasingly grimy look of the Ferrybank Centre is to be rectified in the coming weeks, much to the relief of local Councillors

Director of Services Sean McKeown confirmed that a marketing plan for the centre has been developed by the IDA with a view to “promoting it for Foreign Direct Investment (FDI) opportunities”.A marketing budget has also been secured to promote the facility to potential investors, while a new maintenance plan has come into effect, which will lead to a long-overdue ‘spring clean’ of the centre’s exterior by the end of March. Some of the floor space within the centre has been rezoned, Mr McKeown said, “to make it more attractive to (potential) investors”, who emphasised the pro-active stance the building’s owner is taking with the IDA. This also means that the centre will not be exclusively put to retail/shopping use if and when it opens. And if the “right opportunity is identified,” Sean McKeown said that positive discretion will be shown towards such a project under the latest Ferrybank Local Area Plan (LAP). He added: “Our hope would be that a fairly significant employer attracted in there which will fit the FDI space.”
District Chairperson Fidelis Doherty (FG) said it was a relief to learn “that a maintenance plan for the building was now in place. The look of the building over the past year has been sending out the wrong message so it’s good to know the look of it is going to be cleaned up and improved”. Cllr Pat Dunphy concurred, adding: “It’s good to know there’s something going on behind the scenes, while Cllr Eamon Aylward (FF) said it “would be great to see the centre eventually taking off”. The facility also comes with over a thousand car parking spaces in two under-crafted floor plates accessible from the Ferrybank AFC side of the building.