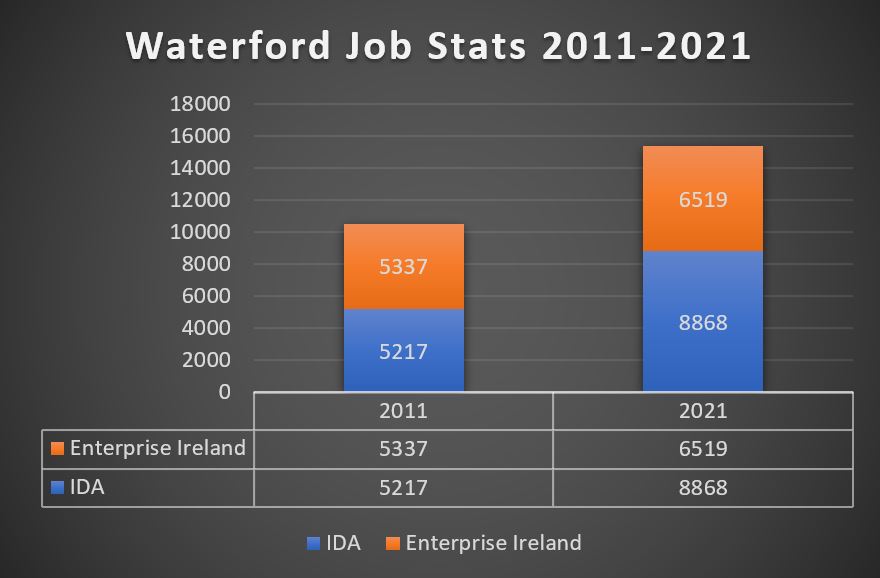 State supported employment has surged to 15,387 in Waterford over the past decade with 4,833 extra people in work in Enterprise Ireland and IDA client companies. The phenomenal growth has been highlighted by Fine Gael Senator John Cummins.
Senator Cummins said: “Employment growth in Enterprise Ireland (EI) companies in Waterford increased by 8% in 2021, a year of record jobs growth for EI companies who are connected to markets all over the world. Likewise employment growth in IDA client companies increased by 7.3% during 2021, adding a further 602 jobs in Waterford.”
He added: “I have been working very closely with Tánaiste and Minister for Enterprise, Trade and Employment Leo Varadkar to emphasise the importance of job creation in Waterford and the wider South East region. Since Fine Gael came into government a decade ago, we have seen the continued upward trend of IDA and Enterprise Ireland supported employment in Waterford and I look forward to that trend continuing in 2022.
“If one thinks back to 2011 when Fine Gael were elected to steer our country out of the horrid recession which our country was in the midst of, unemployment in Waterford was one of the highest in the country and state supported employment was at a low ebb. We set about developing and implementing a series of Action Plan for Jobs which have delivered for the people of Waterford and the South East Region and this work will continue in the time ahead.
“One of the issues I continually raise with Tanaiste Leo Varadkar is the need to focus on job creation within the regions and that is why Enterprise Ireland’s figures last week which show that 68% of new jobs were created outside of Dublin are so encouraging.
“I want to see Waterford and the South East continue to benefit from more and better jobs. To do that we need to ensure we have readymade building solutions for prospective EI and IDA client companies. That is why projects like the North Quays are so important in terms of city centre office space, as is the construction of the 3rd Advance building at IDA Butlerstown Business Park which is due to commence construction during Q1,” Senator Cummins concluded.
Speaking at the launch of Enterprise Ireland’s Annual report last week, Tánaiste and Minister for Enterprise, Trade and Employment, Leo Varadkar, TD, said: “Over 200,000 people now work in Enterprise Ireland client companies. That’s almost as many people working for multi-nationals. It’s great to see Irish exporting companies performing so strongly last year notwithstanding the disruption to trade caused by Brexit and the pandemic. There was a net increase in EI employment of almost 12,000.”
He added: “I am particularly pleased that jobs growth occurred in all regions with almost 70% of new jobs growth occurring outside of Dublin and particularly strong growth in the north-west and south-east. This is an extra-ordinary performance and I want to thank the Enterprise Ireland team for their phenomenal work in the year gone by. We are well on our way to meeting our target of having 2.5m people at work in Ireland by 2024.” 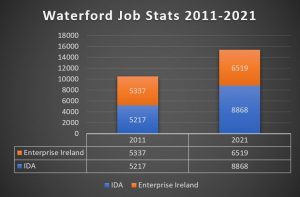