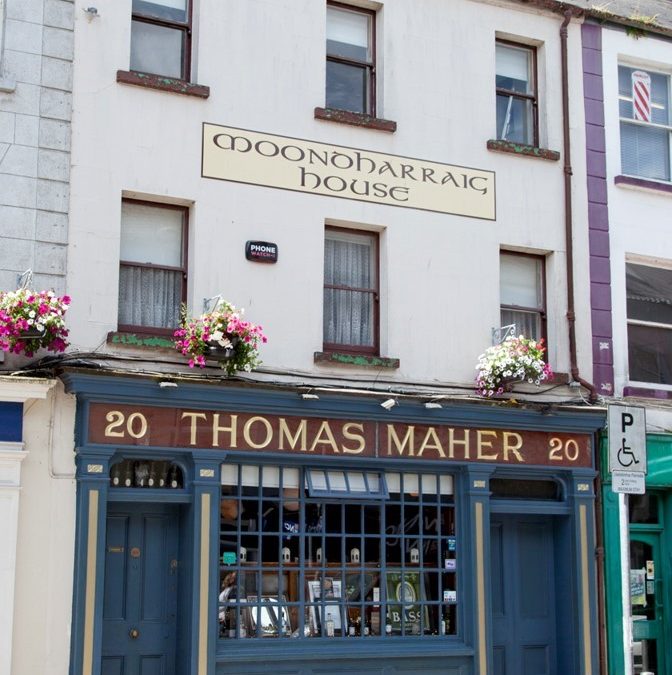 The very well-known Moondharraig Lounge has recently been put up for sale. Known popularly as Tom Maher’s, it dates back to the early 1800s as a licensed premises.More recently Bernard Kelly has been the owner and licensee. He is a nephew of Mary Maher, wife of the late Tom Maher. Tom Maher was a legend and a great Wolves supporter. The black and amber of Wolves were like the Kilkenny colours.
He did not like bad language in the bar or people over drinking. He knew a customer’s limit and on Fridays would even close at 7pm. Maher’s had their own bottled whiskey like Downes on Thomas St.
It was known the world over for this and its unique character and even got very good recommendations form the Trip Advisor. 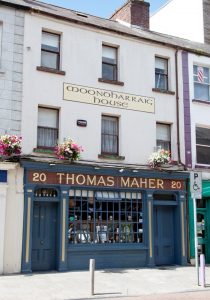 The whiskey would be distilled off site and branded with Mahers name on it, a gift for some at Christmas time. Waterford people living away would love a pint in Tom Mahers, over the summer or Christmas.
It has a long tradition and has attracted some very loyal customers over the years. Some very well known people have been there too being so close to Garter Lane.Many well known actors, sports people and many business people have been there. Going in there it would be hard not to have a conversation and meet new people.The late Tom Maher was famous for not serving women, but that all changed and, as Bernard said in the past in the Munster Express, when he took over they were very interested in going there and now couples regularly go there at weekends for its special atmosphere.
John Rohan, auctioneer, has charge of the sale and says there is a reserve of €320,000 on it. Some viewings have already taken place prior to the sign going up.In the brochure it is described as follows
“Celebrated licensed premises Tom Maher’s comprises a three storey terraced premises c 190 sq m located in the heart of Waterford city centre within the trendy Cultural Quarter. Dating from the early 1800’s this Waterford institution boasts the original handsome long wooden bar with snug off, generous sheltered smoking area to the rear and separate door access to the overhead accommodation presently set out as residential accommodation and studio. The attic is also floored and is used as storage. The property retains an attractive pub front which adds to the quality of the streetscape. Neighbouring occupiers include Tully’s bar, Garter Lane Arts Centre, Waterford Institute of Technology Dept of Architecture, The Granary café while the property is only c.100 metres from the entrance to the main retail district commencing with Shaws and restaurants to include La Boheme and The Red Pepper. The city quays are also nearby while the area is home to a large residential population of all ages . The property is a protected structure.”