Home » Sports » Athletics » AND ON THEY RAN…

AND ON THEY RAN… 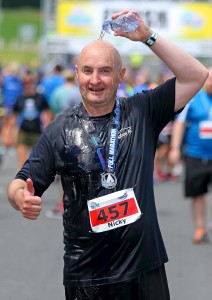 What better way to cool off on a warm day at the Waterford Viking Marathon than follow the example of Nicky Boland after he finished in a time of 04:24.51. See Sport 10 and 11 for more. | Photo: Noel Browne

The skies were largely overcast as the 3,000-plus runners, joggers and walkers hit the streets and surrounds of Waterford City on Saturday morning last for the sixth annual Waterford Viking Marathon.
And while the sun didn’t break through in a meaningful way until shortly before 1pm, as many marathon runners began to cross the line at Carriganore, the humidity proved a constant presence as the field thinned out across the new course.
Taking in both Rice and Meagher Bridges, along with the Waterford Greenway via a specially constructed ramp, runners set off from the Mall following a fun warm-up, followed by the ‘Viking Clap’, in support of the ‘Hand on Heart’ campaign which is being conducted by the Health Equality for the South East (HEFSE) Group.
The men’s marathon title was claimed by West Waterford AC’s Raivis Zakis, who reached the WIT Arena in 2 hours and 37 minutes, with last year’s winner Tom Hogan (Wexford) and Liam Tracey (Watergrasshill, Cork) taking the other podium slots.
For the fifth time, the remarkable Pauline Curley (Tullamore Harriers), aged 48, took the women’s title, with Dolores Duffey and Lena Sinclair (Liffey Valley) the next two home over what runners acknowledged as a testing, albeit scenic course.
When one considers that Pauline was part of an Irish team which claimed World Cross Country Team Bronze at the 1997 World Championships, alongside Sonia O’Sullivan and Catherina McKiernan, that this Olympian remains so stunningly competitive represents one of the great modern individual feats in Irish sport. And she’s become a great friend of Waterford’s through her support of this event.
The first runners home on Saturday morning last were in the Quarter Marathon, with Clonliffe Harriers’ David Mansfield (who finished on the podium at the recent Cork Marathon) breaking the tape in a time of 36:32, followed by Noel Murphy (Waterford AC) and Ruairi O’Donnell (Ferrybank AC).
In the women’s event, Sinead Brannigan, a running inspiration locally through her band of Greenway joggers, took the spoils ahead of Cork’s Emma Healy and Sinead Kelly of St Abban’s AC.
Butlerstown native Trevor Power (Waterford AC), who only took up running five years ago, followed up his superb run in the London Marathon with a fine success at the Half Marathon distance, clocking 73 minutes and three seconds. Trevor has already run 14 marathons and was thrilled with his run, stating: “You can’t beat running in a big race like this at home, on roads you know well. It was hot out there, but I really enjoyed it.”
James Hamm (Portlaoise AC) saw off Carrick AC’s Derek Walsh in the race for second place, while Ruth Fitzgerald was the first woman home in a time of 1 hour, 24 minutes.
Last year’s second place marathon finisher, Sally Forristal of St Joseph’s AC took the silver medal ahead of Waterford AC’s Sylvia Malone, one of the most consistent high finishers on the regional racing circuit.
And speaking of consistent finishers, the great Mary Ryan Jennings (in the Over 60 category), urged on by her family, powered to the line to complete her 119th marathon.
Drawing runners from Argentina, Hawaii, India, Canada, Egypt, the US and all over Europe (including a 60-plus strong group from Wales), and with 350 helpers lining the route, organisers will not be allowing too much grass to sprout beneath their feet.
Talk of the 2018 run was already in the air long before every empty bottled and discarded banana skin had been retrieved. Congratulations to everyone who made Saturday such a memorable event. See you all again next year!