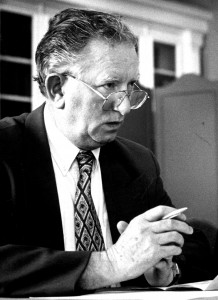 The late Austin Deasy, who maintained a very productive relationship with The Munster Express throughout his lengthy career in public life.

Austin Deasy was a colossus of Waterford politics during the 1980s and 1990s and was an influential Minister for Agriculture for five years from 1982 onwards.
Hardworking, honourable, testy and shrewd are words that come to mind when talking about a man who was Waterford through and through. He also had a wicked sense of humour that wasn’t always apparent to people who didn’t know him well.
A secondary schoolteacher by profession, Austin first entered public life when he was elected as a Fine Gael councillor to Dungarvan Urban District Council in 1967. He was an unsuccessful candidate in the general elections of 1969 and 1973 but was then nominated to Seanad Éireann by Taoiseach Liam Cosgrave.
His stock continued to rise and, when Waterford was made a four-seat constituency for the 1977 election, Austin received 17.2 per cent of the first preference vote. He took the third seat behind Billy Kenneally and Jackie Fahey of Fianna Fail with his Fine Gael colleague Eddie Collins, a TD since 1969, taking the fourth seat.
In the next five general elections of 1981, 1982 (February), 1982 (November), 1987 and 1989 Austin Deasy emerged as the poll topper.
In the general election of 1992, Brian O’Shea of Labour was the poll topper but Deasy recovered to top the poll again in 1997. He retired before the 2002 general election where Martin Cullen topped the poll but Austin’s son, John, took the second seat for Fine Gael and continued the family tradition of public service.
After the 1987 general election count in what is now Garter Lane in O’Connell Street, Austin addressed the assembled media and publicly called on Taoiseach Garret Fitzgerald to appoint him to the cabinet as a senior minister. It was said at the time that Fitzgerald, in a somewhat fit of pique, handed the Waterford man the notoriously difficult Agriculture portfolio. To the surprise of the doubting onlookers, Austin was a hit with the farmers and even those who opposed his appointment came to respect the effort and expertise he brought to the job.
Austin Deasy was the last senior minister from Waterford until Martin Cullen began an eight-year stint at the cabinet table in four different portfolios from 2002.
There is no doubt that, as well as dutifully carrying out his work for the country, Austin Deasy did his best to look after Waterford. A lot of the work was under the radar but money poured in to a lot of places where it was needed.
Probably his most public success was his battle to have Ardkeen General Hospital created Waterford Regional Hospital. If it wasn’t for Deasy (seriously supported by the influential Minister of State Eddie Collins) the regional status would almost certainly have gone to Wexford or Kilkenny.
There was also the weekend when Bord na gCon locked Waterford United out of Kilcohan Park. A tough Sunday morning phone call from Austin saw the gates opened just in time and the Blues were able to fulfill their home fixture.
As a Munster Express journalist, I had a very good relationship with Austin. He always took our calls or returned them within a short time. Ever courteous, he was a serious person dealing with serious issues and we operated on that basis.
The only dark cloud on our relationship occurred when I once fell foul of Mrs Kathleen Deasy who took her husband’s position very seriously indeed and didn’t appreciate a humorous piece I had written (a true story) about Austin on a visit to a trade fair in Germany. She later graciously forgave me but I never told her who had given me the story in the first place, someone very close to her heart!
Among the trade fair entourage in Germany was the late Waterford businessman, Noel Molloy, who, at the time, was Chairman of the Beef Marketing Board. Everything went well and a lot of business was done but the influential German Minister for Food, Agriculture and Forests, Josef Ertl, took it into his head that Austin was a great singer and therefore should perform at the grand banquet on the final night.
Despite Austin’s repeated protestations, the repost was always: “But Minister you are too modest. As you are from Ireland, you must perform ‘Ze Green Green Grass of Home’ for us.”
There was nothing for it but to agree but neither Austin nor anybody on the trade mission had a clue about ‘The Green Green Grass of Home’.
There was no Google or YouTube in those days so Noel Molloy telephoned his brother, Joe, in Waterford. Joe knew the song and agreed to sing the Tom Jones hit down the phone for his brother who wrote down the lyric and then taught Austin how to sing it. The Irish Minister’s subsequent performance received thunderous applause but Austin modestly declined an encore!
In Austin Deasy, Ireland has lost a great public servant of the highest caliber and Waterford one of its best. May he rest in peace.