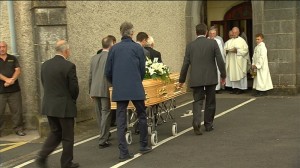 The remains of the late Austin Deasy are received at Saint Mary's Church in Dungarvan. | Still: RTE

A very strong Cabinet and Government presence attended the funeral of the late Waterford Minister for Agriculture and TD, Austin Deasy, he served in the 1982-87 Cabinet and was largely responsible for the new Waterford Regional Hospital.
Father of current Waterford TD John Deasy, his remains attracted a huge crowd at Kiely’s Funeral Home, prior to the removal to the Church.
St Mary’s Church in Dungarvan saw many dignitaries to pay their last respects to Austin, including incoming Taoiseach Leo Varadkar and his rival to lead Fine Gael, Simon Coveney TD and Minister for Housing sat beside one another, along with former Fine Gael leader Dukes, a former leader of Fine Gael.
Mr Dukes led the party in the 1987-89 period and devised the Tallaght strategy, where a minority Fianna Fáil government was supported unopposed by Fine Gael, the reverse of today’s situation in Government .
Former Tánaiste and Labour party leader Dick Spring from Kerry also was in attendance
Fellow cabinet colleagues Frances Fitzgerald (Justice), Simon Harris (Health), Paul Kehoe (Defence from Wexford) and Eoghan Murphy (Minister of State), who led Mr Varadkar’s leadership campaign was also there.
Local Waterford Minister of State, John Halligan was also in attendance as were fellow TDs Mary Butler (FF), John Paul Phelan (FG) Senators Paudie Coffey (FG) and Grace O’Sullivan (GP) along with many Councillors and party workers from Waterford, Tramore and the county, including former Seanad Leader, Maurice Cummins (FG).
Councillors we spotted at the obsequies included Seanie Power, Damien Geoghegan and
John Carey (all FG), Cha O’Neill (Ind), James Tobin (former County Mayor for Fianna Fáil) and ex-Fine Gael Councillor Anne Marie Power from Tramore.
Austin’s Brother Billy who served with the Missions delivered the homily, joking that he had never voted for Austin Deasy, as he was out of the country as a Mission priest in various parts of the world where his superiors sent him.
Austin had just two interests, we were told: his home life and politics. Born in 1936, he had seen much in his life and had devoted his life to the political work when not at home.
Highly dedicated and hard working, he was a regular poll topper, first elected in 1977, after being one of then Taoiseach Liam Cosgrave’s Seanad nominees in the 1973 Government.
He was a conviction politician of the old style and didn’t agreed with Alan Dukes’ Tallaght strategy and resigned from the shadow cabinet in March 1988.
When John Bruton was elected party leader in 1991, Mr Deasy was returned to the agriculture brief but by October 1992 he was given the marine opposition portfolio “with less responsibility”, as noted by The Irish Times.
He always retained great respect from his colleagues, even those with whom he had ideological differences.
Even Fr Deasy said he was intransigent and didn’t always agreed with the status quo – it was Yes or No for him.
But now on Monday last he said he had unexpectedly gone to claim his inheritance. Like a train it can go in or go out: a funeral is like an arrival and his brief illness saw him leave the world earlier than expected.
The staff of University Hospital Waterford, and specifically the nurses and doctors in Medical Ward One were referred to during the Prayers of the Faithful in what was a traditional family funeral.
There were no big speeches or tributes from the altar, it was kept simple, which was how Austin lived. At end of the Requiem Mass, ‘Dungarvan My Hometown’ was sung by Muriel Coleman.
The President was represented by Aide de Camp Captain Eoin Rochford and the Taoiseach Enda Kenny, by aide de camp , Commandant Stephen Molumphy (the former Waterford hurling captain).
The RTE cameras were there along with the national press in what was a low key funeral for such an immense Waterford political figure.
His fellow politicians remembered him warmly whom we spoke to afterwards for various reasons, as a mentor and a man of conviction.
Afterwards in the cemetery as the Cabinet headed back to Dublin to discuss the election of a new Taoiseach, the people of Waterford and Dungarvan lined up in their hundreds to sympathise with son John and his family in the as the rains began to pour in from Dungarvan Bay .