Comeragh College mark their special day minus the Education Minister 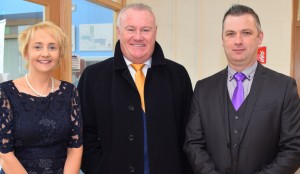 His name may well be on the official opening plaque now on display in Comeragh College, but the shadow of Education Minister Richard Bruton has yet to cross the threshold of the €13 million campus at Tinvane.
This was the second mini-eyebrow archer involving a Minister at the college; the previous incident involving then minister (and current Tipperary TD) Alan Kelly turning the sod on a site where the school building behind him was already up to roof level!
While Minister Bruton was engaged in separate engagements in Waterford that morning and in Templemore later that afternoon, his conspicuous absence was commented upon by Tipperary’s Educational Training Board (ETB) Chief, Fionnuala McGeever.
Addressing the hundreds gathered for the official opening in a packed Comeragh College Sports Hall, Ms McGeever said: “Unfortunately, the Minister for Education and Skills can’t be here as he is at another function in Waterford city…a question and answer session on education, and it was an unexpected addition to his diary.
We were notified of this but it was rather too late logistically to move things around…and to move it would have incurred additional expense to the school budget, and additional, voluntary work by all of those involved in the organising committee.” 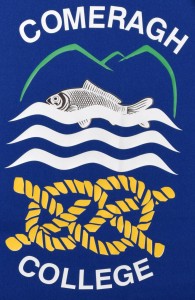 She added: “We were offered another time today but logistically it would have been impossible to reorganise everything. The date and time had been given to us by the Department, we had waited in good faith for this date and time, and we worked around that imposed schedule. I honestly don’t believe that (the Minister and his office) fully understood how important and exciting this event was to so many people; it has taken so many years to arrive at this point, 25 years to be exact and we felt very strongly that we stick to the plan that had been so diligently organised by everybody and celebrate the day in accordance with the wishes of the Board of Management.”
A spokesperson for Minister Bruton said he would visit Comeragh College “in due course” but a date for such a rescheduled visit had yet to be finalised.
Board of Management Chairperson, local Councillor Kieran Bourke, said the opening of the school represented “the beginning of a new era in the educational life of our town”.
“Schools are a vital component of the infrastructure and fabric of a community, which makes the opening of a major new school building such as this such an important milestone in the educational, social and economic life of Carrick-on-Suir and (its) surrounding areas.”
Cllr Bourke added: “It is the culmination of a process that has involved much work and effort on the part of many people, and while it would not be possible to list all of those, who through their determination and commitment have brought this project to fruition, I wish to recognise and thank Fionnuala McGeever, the CEO of the ETB and the Department of Education for the commitment you’ve shown to Carrick-on-Suir through your investment in this school.
“I want to thank the teaching and administrative staff of Comeragh College, under the leadership of Principal Kevin Langton and Deputy Principal Kathleen O’Donovan-Ryan. Thanks also to the Board of Management, Parents Association and Students’ Council.”
Cllr Bourke said it was fitting to mention the contribution made by the college’s former principals and teachers “to the education and development of generations of children in this area”.