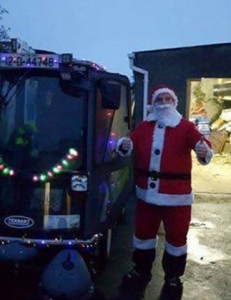 Tramore’s Santa Sweeper - as once he looked.

TRAMORE’S popular Santa Sweeper has been forced to hang up his outfit as a result of health and safety regulations.
Local authority worker Joe Fitzgerald has become a familiar sight in Tramore as he travels around the town in his road sweeper wearing his festive outfit.
However, his Santa suit wearing days have come to an abrupt end following a decision made by Waterford City & County Council.
The council has asked Mr Fitzgerald to refrain from wearing the suit as a result of fears that it does not meet Irish PPE (Personal Protective Equipment) requirements.
The decision has prompted an outcry in Tramore, with an online petition calling for Waterford City & County Council to reverse the decision already attracting many signatures.
Locals have said that Santa Sweeper’s presence has added to both community and festive spirit around the town.
“We all saw Santa Sweeper hard at work last year, and he brought smiles to the faces of children and adults alike. He brightened up our mornings with the children waving, and helped boost the spirit in Tramore,” said one local.
“I’d say he doesn’t even know how many adults and kids enjoy seeing him waving out as he goes about his work,” said another local who spoke to The Munster Express.
“I remember walking the dog and getting a beep and a wave and it immediately brought a smile to my face. In this day and age, you can’t put a price on something like that which brightens up your day!”
Local Councillor Jim Griffin (SF) has made representations to Waterford City & County Council in relation to the issue and has spoken with Director of Services Fergus Galvin.
Cllr Griffin said Mr Galvin was “very respectful” of the concerns raised.
“He was very understanding and listened to the reasons why we want Santa Sweeper to remain in Tramore and gave me plenty of time to outline what a popular sight he is in Tramore. But he also understands the concerns in relation to health and safety.”
Cllr Griffin continued: “I also understand that those health and safety concerns have to be listened to, but we are an understanding council so it would be a lovely message for us to send out to say that Santa Sweeper can remain on the streets of Tramore.”
Mr Galvin assured Cllr Griffin that he would examine the issue and try to reach a compromise.
Cllr Griffin also said that Santa Sweeper has contributed to creating great festive spirit around the town and said children love to wave at him.
“He is a familiar sight around the town and children love to see him. The last thing you’d expect to see is Santa waving out of a road sweeper so it’s a real novelty. I hope that common sense will prevail,” said Cllr Griffin.