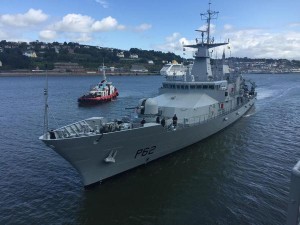 The LE James Joyce: Cllr Eddie Mulligan has called for her to be twinned with Waterford.

Waterford City and County Councillor Eddie Mulligan has called for the twinning of the Irish Navy’s newest vessel the LE James Joyce with Waterford city to ‘revive a unique bond that exists between ship and the city’.
The LE Aoife, the last navy ship to be twinned with the city, was decommissioned last May before it was presented to the Maltese Government.
Commenting on the twining, Cllr Mulligan stated: “In 1998 Waterford City and the Navy began a 17-year relationship that would see the LE Aoife visit the city on numerous occasions.
“The LE Aoife and her crew have been involved in several memorable Waterford events, including the Tall Ships Races and the Reclaiming of the Waters Ceremony – a notable highlight being its role in raising funds for the University Hospital Waterford Pediatrics Department.”
Cllr Mulligan, who had previously made submissions to have the LE Aoife gifted to Waterford City as a National Maritime Museum and Naval Reserve training base, outlined that he understands that the Navy is in favour of the twinning and that all that is now required is the Minister’s approval.
Now that the LE James Joyce has been commissioned, Cllr Mulligan also requested that Defence Minister Simon Coveney “treats the request as a matter of urgency before any possible Dublin-based request gains momentum”.