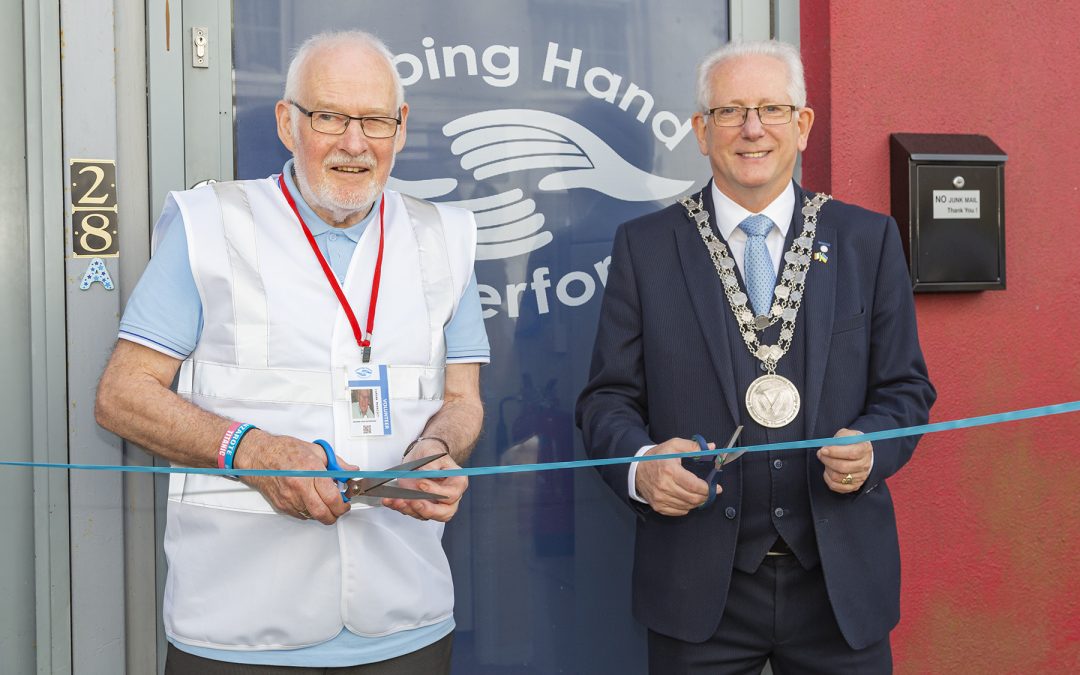 The new home of The Helping Hand voluntary service was officially opened in Waterford on Friday last, May 13th.

The service began operating from a stall near the brewery on The Quay in 2015 before the use of St. Patrick’s Gateway Centre was secured. The service continued to operate from here for a number of years, including throughout the Covid-19 pandemic when a marquee was erected outside.

Volunteers have been providing hot meals, beverages, tents, sleeping bags, emergency provisions, clothing and toiletries to the homeless and vulnerable in Waterford. Volunteers had been striving to secure a suitable premises of their own and this dream has now become a reality as an impressive new facility has been obtained at 28A Mary Street. 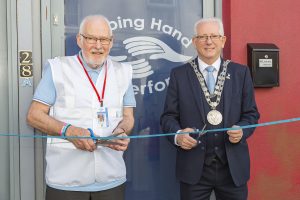 Mayor of Waterford City & County Council Cllr Joe Kelly (Ind) was on hand to cut the ribbon and officially unveil the new premises which was secured with the support of The Causeway Group.  He commended The Helping Hand committee and all the volunteers involved with the service.

“Their work is invaluable and often unrecognised,” he said. “The committee and volunteers don’t look for recognition. It’s not about posing or big statements, it’s about helping ordinary people who are less fortunate than ourselves. It’s unfortunate in this day and age that we need these kinds of services. Without the volunteers of The Helping Hand and associated services where would these people be?”

He described the opening of the new premises as a “milestone” for The Helping Hand.

“It’s fantastic for the group and I hope they go from strength to strength,” he said. “Wouldn’t it be ideal if eventually you had to close this place down as it wasn’t needed? It’s unlikely that this will happen, but it would be ideal.” 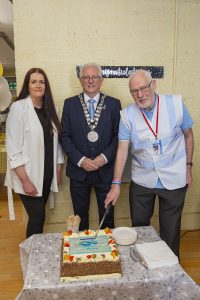 Committee member Stephanie Keating has been involved with The Helping Hand for five years. She had seen founder Colette O’Brien’s Facebook posts about people sleeping rough in Waterford.

“I actually didn’t believe it,” she says. “I’m from the city, born and bred, but I couldn’t believe it. I did some research which confirmed, yes, people are sleeping in doorways. I decided I’d like to get involved and do something and contacted Colette.”

Stephanie explains that over 30 volunteers are now involved with The Helping Hand, with a team of six to eight allocated to each night, Monday to Friday.

In the initial years, there was an average of 18 service users. The current average is between 35 and 38, with the highest number recorded a few weeks ago when 52 people were helped.   It’s not always the same people each night – and it’s also not just homeless people who avail of the service, as Stephanie explains.

“We have some older people that come,” she says. “They are vulnerable and lonely and don’t cook for themselves. It’s a great outlet for people who are lonely. They can come in here, have a nice nutritious meal and a chat. It’s about treating them with dignity, like human beings, and building friendships.”

So, what has the reaction been amongst the service users when they arrive at the new premises on Mary Street?

“They’re just so delighted,” says Stephanie. “They’re sitting down, chatting, having their food in comfort. We can sit with them and make connections.”

One Helping Hand service user outlined their own personal experiences, saying: “Only for the volunteers I would be lost. I first heard about The Helping Hand when they were based on The Quay. I wouldn’t ask for anything, I was so embarrassed, but they helped me. I had heard they moved, and I couldn’t find out where. I was walking up Patrick’s Hill and I saw a fellow with a reflective jacket that said ‘The Helping Hand’. I went in, a lady came over to me and I started to talk. I was very upset, and she listened to me and now I go to The Helping Hand all the time. Every night you get a hot dinner and anything we need.”

The grateful service user added: “The Helping Hand have moved to a lovely place on Mary Street, and we can sit at a table and be waited on by the volunteers. It is brilliant. It’s warm, clean, and enjoyable. Thank you all for the service and for helping us each night – everybody cares for each other.”

Chairperson Vivienne Burns has been with The Helping Hand for four years and previously acted as treasurer. She had seen the service was seeking volunteers and wanted to do something to help address the homeless crisis in Waterford.

“It’s definitely making life easier for the homeless,” she says. “They have somewhere to come where they are treated with dignity and respect. We provide comfort, a place to come and chat where they know there are people who care.  I believe what we do is lifesaving. During wintertime, we are handing out the highest quality tents and sleeping bags which are keeping people alive.”

The service users of The Helping Hand are 70 per cent male and 30 per cent female and include people aged from 18 to 80. Vivienne explains that volunteers have helped service users engage with various different homeless services and supports. 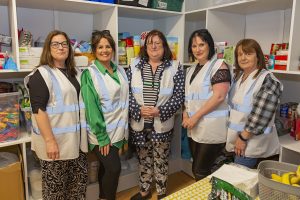 She outlined The Helping Hand’s journey “from starting out on The Quay six and a half years ago serving soup and sandwiches to finally having our own premises just around the corner from where we started”.

“We would like to sincerely thank Cllr Eamon Quinlan (FF) who, after visiting our service in St. Patrick’s Gateway Centre where we were operating out of a marquee, took on the project of finding a premises,” she said.

Vivienne explains that, in addition to The Causeway Group, The Helping Hand has had huge support from various Waterford people and the local corporate sector.

“From the child who organises a bun sale, to the community groups that help us, it’s wonderful to see what Waterford people can do when they come together,” she says.

After being put forward as a chosen charity, funding obtained from SunLife enabled The Helping Hand to carry out work on their Mary Street premises.

“Their donations have really made a difference,” says Vivienne. “If you look at the before and after photos on the wall you can see the reality of what we have done. We now have a comfortable, clean, warm, dry space in which to look after the people who need support.”

“There were times when we worried how we’d carry on for the next six months, and they came along and took our worries away,” she says.

Shirley Russell from Bausch & Lomb attended the official opening and explained that The Helping Hand is a typical example of the local groups which the company and its employees strive to support.

“It’s about giving back to the community and making a tangible difference,” she said. “It’s brilliant for the employees to see the impact their funding is having.”

Additionally, The Helping Hand has also benefiited from the Massed Bands concert. Meanwhile, supporters Patrick and Daniel from Dungarvan were thanked for their annual fundraising sleep out. 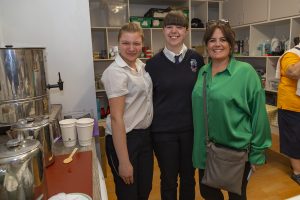 All involved with St. Patrick’s Gateway Centre were also thanked by Vivienne during Friday’s event.

“You couldn’t have been kinder or more accommodating to us and thank you for continuing to help us by accommodating storage of our tents and sleeping bags,” said Vivienne during her speech. “You gave us a safe place to operate from for a number of years and we look forward to seeing you and holding our Christmas party for our service users at the Gateway.” 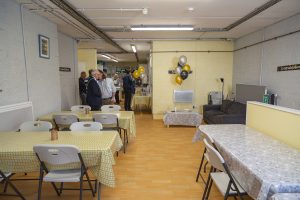 The interior of the new premises at 28A Mary Street.

Vivienne also paid tribute to all volunteers, past and present, associated with The Helping Hand.

“You truly make a difference in people’s lives. Each and every one of you treat people with dignity and respect,” she said. “I have no doubt that we have saved lives through our hard work and the compassion we show every person who needs us. It’s not always easy, but we have nights filled with laughter too.”

Vice Chairperson Eamon Morrissey, who has been with The Helping Hand since the beginning, was specifically thanked.

“He never stops,” says Vivienne. “The work he puts in is phenomenal and I want to personally thank him for all his support.”

Vivienne describes the new premises as being in an “ideal location”. The Haven Hub, a new mental health charity started by Vivienne in December, also operates from this premises on Friday nights from 10pm-2am.

“It’s lovely that the premises can be used by both organisations,” she says.

She added that The Helping Hand greatly appreciate all public donations and reiterated that these can be dropped off between 6.30pm and 8pm, Monday to Friday, at 28A Mary Street.

Waterford is fortunate to have such a wonderful service and such dedicated and enthusiastic volunteers who are passionate about helping others. The Helping Hand certainly lives up to its aim of ‘giving dignity in adversity’.

To keep up to date with activities, visit The Helping Hand Waterford Facebook page or www.helpinghandwaterford.com