ILLEGAL dumping and widespread littering remain a problem in an area of Waterford City which has been designated as ‘No Man’s Land’. The ongoing issues on a piece of land in Kilbarry are proving a huge source of frustration for locals. 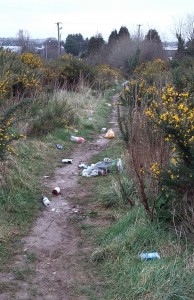 A trail of litter on the short cut which links the Templar’s Hall area to the Cork Road.

Earlier this year, The Munster Express highlighted how Paddy Houlihan, who lives in Ballybeg Square, collected a shocking amount of rubbish from the piece of land located alongside a short cut linking the road opposite Waterford Fire Station with the Yellow House Bar on the Cork RoadMore than 20 black sacks of rubbish, including around 1,500 cans, were collected by Paddy from the litter black spot in early January.
Paddy, who regularly conducts clean-ups in the area, was disappointed to see further large-scale dumping had taken place in the area last week.The area has been referred to as ‘No Man’s Land’ as locals feel it has been neglected for far too long. 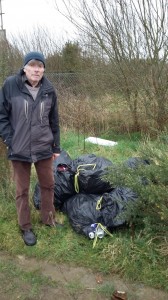 Paddy Houlihan alongside sacks which were dumped in the area last week.

It has been claimed that Waterford Institute of Technology (WIT) students residing in Templar’s Hall, and using the area as a short cut, may be among those who are responsible for the littering.
Paddy claims that there is a noticeable increase in such activity when WIT students return each term.
Paddy is well-known in the community and worked tirelessly on restoring the Knights Templar Graveyard, Kilbarry which is located nearby and which he visits every day to maintain.
He says the amount of litter on display when making his way to visit the graveyard is upsetting.
Paddy also cleans local beaches as part of his involvement with Coastwatch Ireland.