Ship to Shore:Pat Heffernan on Life as a Port Pilot

“It’s a dangerous job, and it definitely requires a lot of skill,” said Pat Heffernan, succinctly summarising his role as a Port of Waterford Pilot. As a harbour pilot, more simply referred to as ‘Pilot’, Pat has the immense responsibility of manoeuvring all ships entering Waterford waters safely into port, using his detailed knowledge of local tides, currents, winds and depths to safely ferry commercial liners, cruise ships and tankards into Belview or Waterford Harbour. Originally from Passage East, Pat spent his formative years on or around boats, and at just nineteen years of age he left Waterford to work on international shipping vessels.

“I had worked for 18 years at sea before applying for the job of pilot here” says Pat. “I had travelled almost everywhere, Asia, Europe, Africa – Australia was the only place I didn’t dock!”This kind of employment record is in fact a prerequisite for the important role of Pilot at a port such as Waterford. “You have to have at least 10 to 15 years of experience at sea to be a pilot,” Pat explained. “I was 35 years old when I started this job”.

Pat works one week on, one week off for Waterford Port, remaining on call 24/7 for the arrival of a vessel.
“Usually we get about 24 hours notice of a ship coming in” Pat says, “but because of weather the estimate can be up to six hours off. I’ll get a call when the ship is an hour away, and then I make my way straight to Dunmore East” 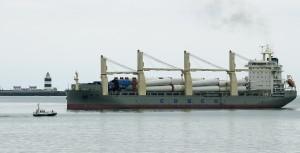 A Pilot Boat leading a vessel into the Waterford Estuary, with the Hook Lighthouse in the background: Photo by Tomás Sullivan

Upon arrival in Dunmore East, a larger ship will be met by Pat’s smaller pilot boat. While the boat is steered by a coxswain and deckhand, Pat must jump aboard the larger ship via a rope ladder, something the 63 year old admits can be very difficult. “About two to three pilots are killed internationally each year on the job,” Pat underlines. “The work is very dangerous, particularly in harsh weather conditions, and pilots can be killed either boarding the ship or disembarking to return to the pilot boat.”

Historically, Pat’s job is one of the oldest professions, with the earliest record of pilot boats dating back to 7BC. Considering the economic and environmental importance attached to ships today, it is not surprising Pat’s job remains essential to maritime travel, requiring a prodigious level of navigational expertise.
“The average size ship is 4,000 tonnes and the cargo could be 2000 tonnes,” he explained. “You have to bring that 6,000 tonne load up the river, stop the ship and swing it (reverse it so it is facing out to exit) all without doing any damage”. Indeed, even if a ship’s captain is a regular visitor to a port, the captain still cannot manage to dock the boat without the careful guidance of the port pilot

Will Pat’s job ever become obsolete? Unlikely, in his view .“Yes the equipment is getting better all the time, and maybe in 20 years there will be less need for pilots, but I don’t think the job will ever go completely.”
For now, Pat remains a lifeline to the Port of Waterford, and will continue to use his knowledge and skill to guide our precious cargo and commodities safely ashore.