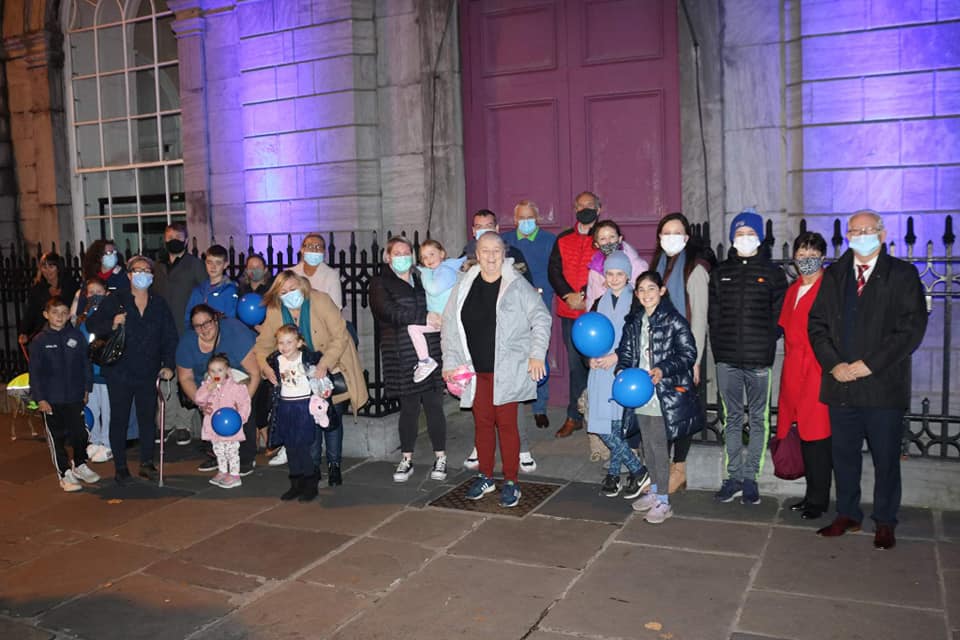 Buildings along The Mall, including City Hall and The Theatre Royal, as well as Waterford Institute of Technology buildings, were illuminated in blue as part of the initiative. Dungarvan’s Devonshire Bridge also joined the blue attractions this year.

People with diabetes from across Waterford and the South-East, their family members and friends, met outside The Theatre Royal on November 14th for the beautiful blue display. This gathering also provided an opportunity for diabetics to meet others with the condition.

Waterford woman Liz Murphy is a well-known local diabetes campaigner who has dedicated countless hours to raising awareness of the condition, including by embarking on visits to Leinster House. Liz firmly believes that Type 1 diabetes, in particular, is one of the most misunderstood diseases.

“I didn’t get diabetes from living an unhealthy lifestyle or from the food I was fed by my parents from a young age. There is no definite reason why a person gets Type 1 diabetes,” she explains.

“Type 1 is an autoimmune disease where the immune system attacks the body’s pancreas – this is where insulin is produced. It cannot be prevented, and it cannot be cured. Without insulin, I would die. Everyone needs insulin in order to survive. No matter how healthy I eat or how much l exercise, a person with Type 1 diabetes will never get rid of the fact that they need to take insulin. I take multiple daily injections and I have to measure my carbohydrates to the amount of insulin I inject. I can eat sugar – I eat the same as anyone else within moderation. It’s all about balance. Every single day I try to not let my blood sugar glucose levels go too high or too low. It’s a full-time job that you can never quit from.”

“Sometimes I get tired of the constant work I have to put into it, but I know that I can’t give up,” she says. “Sometimes you can feel very alone with this illness, but I’ve made friends with many people with diabetes here in Waterford and around the country that I know I can talk to. Social media is a powerful tool for meeting and providing information on diabetes.”

There are a number of such social media groups in operation including the Waterford Diabetes Support page which Liz manages. She says she wants to help make people aware of what the symptoms of Type 1 diabetes are.

The symptoms include, but aren’t limited to, increased thirst and urination, extreme fatigue, unintended weight loss, blurred vision, nausea and vomiting, and fruity breath. “You can be diagnosed at any age, not just in childhood. I know people who have been diagnosed with Type 1 in their 50s,” she explains. 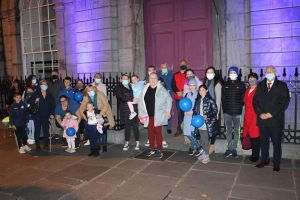 Liz is particularly concerned by the increase in the number of people being diagnosed with diabetes and fears for the future capabilities of our health service.

“The HSE estimated figure for people with Type 1 diabetes is approximately 28,800 and, for Type 2, 234,300 people. This does not take into consideration the amount of people who may have pre-diabetes,” she explains.

Liz continues: “How can the Government, Department of Health and HSE plan for the future health of its citizens when they do not know exactly how many are affected by diabetes? All types of the commonly known variants of diabetes – Type 1, Type 2 and gestational diabetes -are increasing year on year and, unfortunately, there seems to be no forward planning. People need help and education to manage this chronic health condition. It is a constant task, 24/7/365, in order to stay healthy and avoid diabetes complications such as cardiovascular disease.”

Liz has her own experiences of cardiac issues and remains concerned by the lack of full 24/7 cardiac cover at UHW. In addition, she points out that unmanaged diabetes can result in nerve damage (neuropathy), kidney damage (nephropathy), eye damage (retinopathy) and foot problems.”

Along with raising overall awareness about diabetes, Liz has devoted a huge amount of time to campaigning for additional services for diabetics here in Waterford.

“Unfortunately, there are 673 people on a four year plus waiting list to see an Endocrinologist in UHW,” she explains. “This is the latest information and comes from a Parliamentary Question asked in September 2021. I have been in contact with all of our Oireachtas members here in Waterford over the years about the lack of diabetes services in UHW which is one of eight major hospitals in Ireland but, despite this, it is always playing catch-up with regard to diabetes care and never seems to have a full complement of staff.”

“Why did it take so long to get funding for these positions and for them to be filled?” asks Liz. “I do appreciate there is a shortage of staff here in Ireland but during this time it is the patients who suffered.”

Unfortunately, earlier this year the Clinical Nurse Specialist for Diabetes employed in mid-2020 left UHW. “And so, the recruitment process starts again so it may well be 2022 before that position is filled,” says Liz.

She points out that UHW is also the only Level 4 hospital in Ireland in which new or existing patients cannot access Insulin Pump Therapy. 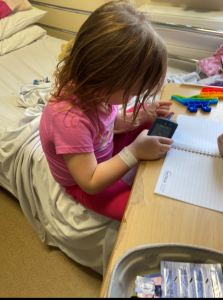 Vicky Casey is a local Type 1 diabetic who currently attends Wexford General Hospital for her treatment. She hopes to move to University Hospital Waterford in the near future.

Vicky has learned to live a normal life with her diabetes. However, Vicky and her husband Liam were dealt an unexpected blow in early October when their four-year-old daughter Robyn was diagnosed with the same condition.

Robyn spent eight days in the UHW Paediatric Department where, according to Vicky, staff were amazed to learn that she had not yet experienced a diabetic ketoacidosis or DKA.

Vicky praised the care Robyn received at the hospital, saying “they couldn’t have done more for her”.  In fact, she believes diabetes supports for children are much better than those for adults.

However, she describes the overall experience of witnessing her daughter being diagnosed with diabetes as “horrendous”.

Robyn began insulin injections within two hours and, after arriving home from hospital, the family had to adjust to a new routine. Did Vicky’s experiences of living with diabetes help with her daughter’s diagnosis?

“It was nearly worse knowing all the ins and outs,” she explained. “It was like bringing a newborn baby home, checking Robyn’s blood sugars every two hours at night.”

Vicky says Robyn is very accepting of her condition.

“She understands to a certain degree, but who wants to be taking five injections a day? She has good days and bad days. We want to give her a normal life. We’ve had our chats and I’ve said to her ‘if you have any questions, let me know and I’ll ask the diabetes nurse’.” 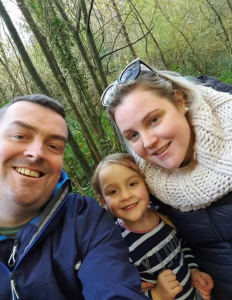 Robyn’s bloods are being checked 10-15 times a day and Vicky says she’s doing quite well. They hope she will get a Dexcom glucose monitoring system within the next few weeks which will mean Robyn’s bloods will only have to be tested a few times each day.

Obtaining an insulin pump would also be a “gamechanger” according to Vicky, as this would remove the need for so many injections.

Vicky says Robyn isn’t constrained by what she can and can’t eat, but careful steps must be taken to ensure all food is carb counted.

“We’re carb counting for breakfast, lunch and dinner,” she explains. “She also has two snacks between her meals which would be 10g and one snack going to bed which would normally be 15g. By doing the carb counting we know exactly how much insulin to give Robyn for her meals. If we go to a restaurant, we have to measure Robyn’s food so the weighing scales go everywhere with us.”

Vicky, Liam and Robyn attended the blue illumination event in Waterford in mid-November as part of World Diabetes Awareness Month. Vicky says it was hugely beneficial to meet others in a similar situation.

“It was a lovely evening, getting people together with everyone on the same page,” she says. “Having a chat helps. We’ve spoken with people on Facebook but it’s not the same.”

Vicky praised the support Robyn receives at Newtown Junior School which she attends. She returned to the classroom three weeks ago. “She had a great day but was exhausted,” says Vicky.

In addition to the support from UHW and Newtown Junior School, Vicky is grateful for the quick action of the Family Practice Medical Centre in Tramore for sending Robyn straight to hospital.

Despite the challenges of being a diabetic, the Diabetes Awareness Month aimed to highlight that there isn’t any reason why people with the condition cannot live a normal life.

There are many well-known people living with diabetes who have refused to let the condition define them. Former UK Prime Minister Theresa May, who is a Type 1 diabetic, has spoken openly about living with diabetes and revealed that she injects herself with insulin up to five times a day to treat her diabetes.

“You just get into a routine. You depend on that insulin and you just build that routine into your daily life. The crucial thing for me is being a diabetic doesn’t stop you from doing anything,” she said in an interview during her time as PM.

She has urged fellow diabetics to never allow the condition to hold them back from doing what they want in life.

“Yes, Type 1 diabetes brings a change in one’s life. I have to inject, test my blood sugar and so forth, but it doesn’t mean there are things I can’t do. You just build that into your life,” she said.

If a UK Prime Minister can live with the condition while also engaging in such a busy work schedule, then this certainly serves as inspiration for Robyn and everyone else living with diabetes.

For more information on diabetes, visit www.diabetes.ie or find the Waterford Diabetes Support page on Facebook