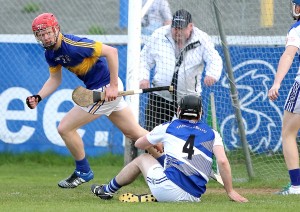 Portlaw's Christopher Mackey, who was sent off for a second bookable offence by referee Thomas Walsh in the 57th minute.

Promoted Portlaw came within a whisker of stunning Dungarvan at last Tuesday’s rescheduled Senior Hurling Championship at Walsh Park, as their compelling second half comeback fell agonisingly short.
Trailing by 0-14 to 0-4 just moments into the second half, the Intermediate champions rallied, laying down a morale boosting marker for the remainder of the campaign, landing 2-10 to Dungarvan’s 0-7 between then at the final whistle.
But the points, nonetheless, went west to Dungarvan, albeit with the caveat that they’ll have to raise their game considerably if they’re to feature in the title shake-up.
After 15 minutes, and with the wind in their favour, Dungarvan led by 0-8 to 0-2, with Patrick Curran and the excellent Jamie Nagle landing a brace of points each, while senior debutant John Curran also contributed to the tally.
Portlaw, who had landed three efforts short of goal inside 13 minutes, opened their account through Paul Power just moments prior to that third underhit/wind-impacted effort.
While it was too early to say the Portlaw boat was listing, there was more than a bit of water on their deck as Dungarvan, through Gavin Crotty, Jamie Nagle (with a marvellous sideline cut) along with Patrick and Colm Curran sent them 0-12 to 0-2 clear by the 28th minute. Brian Coffey registered Portlaw’s second point in the 27th minute before a brace of Paul Power points inside a minute raised Tannery Town voices on the half-hour. But Colm Curran, played in by Nagle, completed the first half scoring to leave Dungarvan with a commanding 0-13 to 0-4 advantage.
Within 45 seconds of the restart, that lead has stretched to 10 points thanks to Ryan Donnelly and one genuinely feared the worst for Portlaw.
But panic they did not, and when Shane and Paul Power combined to send DJ Foran through on goal after 36 minutes, the All-Ireland minor winner rifled the ball beyond Darren Duggan and into the net.
Foran landed two more inside the next three minutes (one from a 65), before Paul Power and Foran again struck excellent points to reduce their arrears to just a goal by the 41st minute, in front of 537 paying spectators.
However, Kieran Power eased Dungarvan nerves when pointing in the 42nd minute, before Foran and Gavin Corry traded points. Portlaw’s early second half gallop appeared to have been halted by an improving Dungarvan heading into the final quarter, with Donnelly, Nagle and Crotty each pointing to leave them seven points clear with just seven minutes remaining.
And when Nagle landed a free in the wake of Christopher Mackey’s 57th minute dismissal for a second bookable offence, Dungarvan were eight clear. Home and hosed? Not quite.
DJ Foran and Colm Curran traded scores before a lengthy spell of additional time beckoned, with substitute Jamie Murphy (from inside his own half) and DJ Foran leaving Portlaw six points in arrears.
The impressive Blake O’Connor thundered over a 61st minute point, added to only moments later by another fine Murphy free, before DJ Foran brilliantly stroked the sliothar beyond Darren Duggan in the 63rd minute, following Brian Coffey’s assist.
Try as they brilliantly did, Portlaw couldn’t muster up another scoring opportunity to force an unlikely draw, but this may yet prove a moral victory with some currency. But nonetheless, to Dungarvan went the spoils – along with a major wake-up call.
Dungarvan: Darren Duggan; Aaron Donnelly, Conor Sheridan, Eoin Healy; Michael Kiely, Jamie Nagle, John Curran; Gavin Crotty, Colm Curran; Kenny Moore, Kieran Power, Liam Ryan; Ryan Donnelly, Patrick Curran, Cathal Curran.
Substitutes: Cormac Curran for Patrick Curran (HT), Darragh Lyons for John Curran (42 mins) and Joe Allen for Cathal Curran (49),
Scorers: Jamie Nagle (0-5; 0-1f, 0-1 sl), Colm Curran (0-4), Gavin Crotty (0-3), Patrick Curran (0-3f), Ryan Donnelly and Liam Ryan (0-2 each), John Curran and Kieran Power (0-1 each).
Portlaw: Luke Power; Michael Donnelly, Darren Rockett, Shane Foran; Jack Walshe, Frank Galvin, Christopher Mackey; Niall Fitzgerald, Brian Coffey; Paul Power, Shane Power, DJ Foran; Blake O’Connor, Noel Mackey, John Hartley.
Substitutes: Gary Morahan for Michael Donnelly and Jamie Murphy for Noel Mackey (both 48 mins),
Scorers: DJ Foran (2-6; 0-4f), Paul Power (0-4), Jamie Murphy (0-2f), Brian Coffey and Blake O’Connor (0-1 each).
Referee: Thomas Walsh.