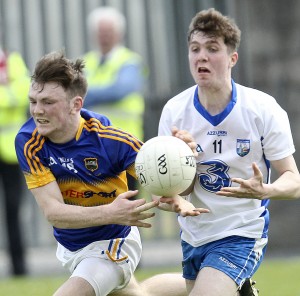 Tipperary needed extra time to defeat Waterford in last Sunday’s Munster Junior Football Quarter Final at a sun-kissed Fraher Field.
The home side at the break in normal time by 0-6 to 0-4 but they will know that they should have gone in holding a bigger advantage, as some poor shooting and a missed penalty by David Power would ultimately cost them.
In fact, it could be argued that some over fussy refereeing counted against Waterford when Limerick referee Richard Moloney blew his whistle very quick to award the hosts their first half penalty instead of allowing David Power the advantage when he found himself one on one with Treaty goalkeeper Jake McDonald.
It was the visitors that opened scoring on three minutes through Joe Keane but the home side quickly got on top as Seamus Lawlor, Paul Walsh, Ferghal Ó Cuirrin and David Power kicked points to give Waterford a 0-4 to 0-1 lead after 19 minutes.
Tipperary were to end the half the stronger side as David Butler hit a brace of points and Paudie White also struck, with David Power and Fergal Ó Cuirrín responding for Waterford.
A early second half free from Jason Gleeson gave Waterford a three-point lead but it was after this that former Tipp senior Ian Barnes began to stamp his authority on the game as he hit two points in five minutes.
But Paul Walsh responded with a brace of his own for the Deise and Fergal Ó Cuirrín also struck to give Waterford a 0-10 to 0-7 lead after 41 minutes.
Barnes hit another brace over the next 10 minutes and Mickey O’Dwyer also pointed, with Paul Walsh responding for Waterford to leave just one between the sides.
But a late Dean Lonergan score for Tipperary meant that the sides had to play out an extra 20 minutes under a blazing sun.
Paul Walsh opened the extra time scoring but Tipperary turned things around to lead by 0-14 to 0-13 come half-time of extra time, by which time the 1753 gate was almost entirely present.
David Butler extended his sides advantage at the start of the second extra half and when Cathal Dillon followed up with two minutes to go, it looked good for the visitors.
Liam Mulligan kicked a late point for Waterford but it proved to be a mere consolation score as Tipp held on to win a match that the hosts ought to have won in normal time.
Waterford: David Whitty; Ciaran O’Neill, Stephen Dalton, Mark Cummins; Liam Mulligan, Conor Walsh, Seamus Lawlor; Seamus Keating, John Hurney; David Gartland, Ferghal Ó Cuirrin, Declan Allen; David Power, Jason Gleeson, Paul Walsh.
Substitutes: Conor Phelan for Seamus Keating (12 mins), Ciaran Looney for John Hurney (49), Tomas Fahey for Declan Allen (54), Michael Culloo for Jason Gleeson (66), Keelan Cassidy for Paul Whyte (69) and Michael Crotty for Seamus Lawlor (75),