The Dublin International Film Festival on Tour came to Garter Lane Arts Centre in the shape of ‘The Merger’, an Australian feel-good comedy about the rural setting of Bodgy Creek and the dwindling fortunes of its local Australian Rules Football team.Similar to many current Irish villages, the club is finding it difficult to field a full team until former AFL star Troy Carrington suggests drafting in players from a nearby refugee support centre, thereby raising the hackles of some of the local traditionalists and die-hards.Who knows, this could be a future scenario in Ireland if a GAA team runs short of players and need new personnel. The screening attracted a healthy attendance and members of its cast and production team in attendance earned a standing ovation.
With overtones reminiscent of Irish humour, it’s clear that Australians like to ‘take the mick’ and engage in self-denigration. In a story which illustrates clear differences in culture and race, one which ultimately draws a community together, the movie also shows the typical Aussie male’s love of sport, beer and camaraderie.
At times, the old mono cultural world of older generations clashes with the younger generation and the recently settled cultures and also captures the essence of the relationship between a Grandfather left to raise a grandson f 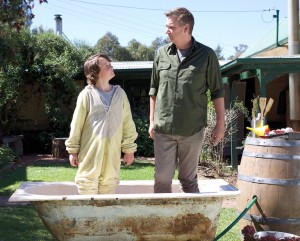 Starring Australian stand-up and theatre comedian Damian Callinan (who loves Pat Shortt-like audience engagement during his shows) and adapted from his acclaimed stage show, ‘The Merger’ has been well received both at home and on foreign shores. Callinan, who attended the screening in Waterford, also took part in a post-movie Q&A session which was chaired by Frank Ryan. Australia is a nation immigrants and that point is also not lost within the movie, as Damian told the Waterford audience and while he didn’t want it to be too preachy, the filmmakers strove to make it real.
The movie, he said, has a heart and concludes with a happy ending, with even some romance along the way. An effective story, we also managed to meet with its producer, Anne Robinson (formerly of NBC, having worked at the 2000 Sydney Olympics), who put a huge effort into it and put her time in free during this tour. For the filmmakers, this was all about delivering a story based on an important and relevant social idea.
A number of Irish Australians were in the audience for the event and really identified with and the storyline of small town Australia, which is not that different to the Irish experience.
The film was made in Wagga Wagga in the State of Victoria with many locals travelling hundreds of miles to see it when it was released. Now the movie is in Europe and is also going to the United States.
The movie also presents a more positive image of tolerance and inclusiveness from an Australian perspective. The refugee issue is considerable ‘Down Under’ and this movie highlights the plight of Syrians and Africans, featuring one actor from Burundi and another from Asia who made it to Australia from islands off the mainland.
The producers and cast screened the movie in Dublin, Sligo and many other locations which they greatly enjoyed. ‘The Merger’ was brought to Waterford by Access Cinema with the support of the Australian Embassy in Ireland and the Arts Council.