Home » Entertainment » Music » BE YOURSELF!

Quangodelic to perform at Central Arts
Huge Cork funk collective Quangodelic’s new single, ‘Be Yourself’, promotes a political message of self-acceptance in a world of conformist social pressures.The song’s message is very much in keeping with the band’s ethos: Quangodelic is a vast, fluid outfit of animal-mask-wearing creative souls united by their love of funk, fun and humanity in general.
The group, who have built up a following in Tramore and Waterford, launched their debut self-titled LP (available on vinyl and for streaming) on Friday last, February 22nd, will perform a live launch of their record at Central Arts this Friday, March 1st.
Quangodelic’s gigs can involve anywhere between eight and 20 musicians, ranging in age from 22 to 52 and from a diverse range of backgrounds and nationalities. 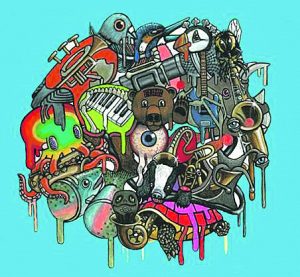 The band’s live highlights have included playing at festivals including Electric Picnic, Townlands Carnival, Whelan’s Brass and Blues Fest and K-fest in Killorglin, as well as in venues including Connolly’s of Leap and De Barra’s Folk Club.
However, their debut album has been a long time coming, in no small part due to the pressures of assembling such a vast and motley crew for recording. The resulting eight-track album is comprised of original material on a variety of topics including the building boom (‘Elysian’), the depressing life of tax collectors (‘Mr Taxman’), and the cautionary drink-driving tale, ‘Blackwater Rising’. Be Yourself has a message for everyone of every age, race and gender: so Be Yourself and be proud!