“A wealthy, sophisticated and older French gentleman, de Becque has built an impressive plantation on the island. He claims to have killed a man in France, forcing him to flee the country. He volunteers to serve as a spy for the American troops when Nellie calls things off between them.” – Character profile of Emile de Becque
“Anything doing stagewise?”, Pat O’Gorman, a good friend of this newspaper asked me at the Greenway Manor Hotel prior to the launch of Noah O’Sullivan’s ‘Wish To Walk’ fundraising campaign. “Nothing in the pot right now,” I replied to Pat, just 45 minutes before my plans for the next few months were happily turned on its head. So Pat, if you’re reading this, I wasn’t telling you a porky when you enquired! The mobile sounds as I leave the launch and receive a call I hadn’t anticipated. It’s Bill Stafford, who has successfully directed ‘Man of La Mancha’ and ‘Fiddler On The Roof’ for Waterford Musical Society (WMS), and whom I shared the Garter Lane stage with in the David Hennessy-directed ‘Kings Of The Kilburn High Road’. 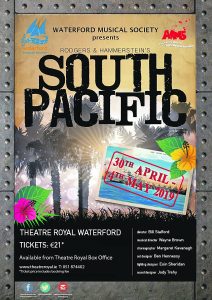 Wryly pointing out that my days as a pantomime prince are well behind me (it’s 12 years since my last ‘royal appearance’ in Carrick-on-Suir), Bill soon cuts to the chase. He’s in the director’s seat again for the 2019 WMS production, ‘South Pacific’ (April 30th to May 4th) and he wonders would I be interested in the role of Emile de Becque. Wow. Emile de Becque. The lead role. Singer of ‘Some Enchanted Evening’, one of the greatest show numbers of them all. I don’t know how many times I’ve heard Colm Wilkinson singing that track on his ‘Stage Heroes’ CD I’ve played over and over since my mid- teens. About a year ago, I saw a vinyl version on a shop shelf and I just had to buy it.
In the 23 years that I’ve been involved in musical theatre, I’ve never had such an offer put to me. It’s the end of the working day when Bill calls; the mental ‘to do’ list is as packed as ever and initially I don’t quite process what’s been put to me. Emile de Becque. Some Enchanted Evening…a stranger across a crowded room. In the Theatre Royal!
Bill gives me a few days to mull it over. On the drive home from the Greenway Manor, I make two quick phonecalls and share the news. What to do, I wonder? “You have to do it,” is the first reply. “Oh, you must do it,” says my second caller. Within a few minutes of Bill’s call, I’d made up my mind, but I just needed to hear what two people I’d trust my life with thought of it all.
I don’t need a few days to give Bill my answer. I’m back on the phone to him within an hour of his call to say thank you and yes, I’d love to do it. I’d absolutely love to do it.
This Rodgers and Hammerstein classic is not one I’m overly familiar with, and I’ve only begun my homework in earnest in the past 10 days. The score is sublime, the overture alone is spellbinding and there’s a wonderful mix of whimsy, fun and good old-fashioned romance throughout the show. I’ve dialogue aplenty to learn, weight aplenty to lose (!) and am just tickled by the prospect of being under the lights of our wonderful theatre once more, where I hope to repay the faith Bill had placed in me. A hectic three months lie ahead. It’ll be worth it.
Tickets for ‘South Pacific’ are priced €16 for the April 30th preview, €21 for the Stalls, Dress Circle and Upper Circle (Rows A to C) and €20 for the Upper Circle (Rows D to E).
For bookings, call the Theatre Royal on 051-874402or visit www.theatreroyal.ie