Hilly scenery, quaint historic villages and wine country
Mid September last, we paid a visit to French Catalonia.It has much to offer from the splendid coastline to dramatic hills that surround large areas of vineyards and vegetable production.
Further inland you have the mighty Pyrenees that reach well over 2,000 metres.
The main base was Perpignan but within easy driving distance of one hour you can reach a large variety of sights.We even took an old train “Le Train Rouge”, to Maury and Rivesaltes, where you learn about wine production pass along old viaducts see historic villages.
Then to change the mood we arrived at an old refugee camp where refugees from the Spanish civil war were hosted. Later in a more grim use Jews were rounded up and placed there as part of a transit camp by Nazis, who transport a few thousand of them to death camps from 1942-44. Special memorials for both Spanish and later the Jews, and museum.
Our first job on arrival with our local tourism man Nicolas was to get a feel for the wider area from the Forca Real and see the Mont Canigo Massif and Pic de Bugarach.

Canigo Mountains has many hiking trails for walkers and cyclists.Here you can see the large range of the Pyrenees mountain range to the distance is Andorra, the independent state between France and Spain, not in EU. At 1280 metres it is higher than any mountain in Ireland. Forca Real can be reached by car and a short walk and is at 500 metres. In older times people did pilgrimages here and hoped some day they might ascend to heaven among some religious beliefs, hippies of the sixties also made treks here. We went to Forca Real, which is the middle of the two major valleys of the area and is at. There is a 300 degree panorama view, even as far as the sea to the cape of Port Vendres not far from Collioure. Great place for pictures and get an appreciation of the vast range of country side from mountains to rich wine valleys leading down to the Mediterranean sea..
Further away is the Fort Romeu mountain station and village, 90km from Perpignan. Cyclists go here and Olympic athletes train there nearby also is a ski resort and you can get there on the one euro bus from the city of Perpignan.On the way there and looking down the valley we saw a massive solar farm with acres and acres of plastic harnessing the energy of the sun. Will this be the future?As we got back to the valley, we passed acres and acres of vineyards and men could be seen on tractors bringing their grape products to the wine producers, as we were in the middle of the harvest in the Roussillon wine region.
Our next stop was the wonderful medieval town of Castlenou. Amazing old castle with walled town and inside you can walk along medieval streets and pop into a craft shop or a cafe. We met with one retired man from Paris, who has a home here and told us how he maintained his historic home. We ventured through the town, walking along the narrow cobbled streets , we noted two well dressed women float by, it turns out they were in a TV show and a film crew was on hand using this romantic village as a backdrop, which dates to the 11th century. Castlenou is really beautiful and almost drops from a movie set. It was more like a Tuscan village in Italy almost.
The Castlenou castle was owned by a bank after a debt default and recently sold it to the local council for one euro. This is now being restored and was not open for visitors on this occasion.A craft shop owner from Brazil told us they have festivals in the town during the third weekend of July, some interesting craft shops and places to dine or buy wine. Flowers and plants adorn the streets and houses in what is really picturesque.
As the little businesses closed we headed back to the coast and passed via the Villefranche lake of Villeneuve de Raho.This is close to the city of Perpignan on the south side, the lake formerly was part of the town dump and has been excavated for amenity use, with camp site and restaurants. Waterford city lacks a tourism camp site, might be an idea for the future near Kilbarry, close to the RSC. 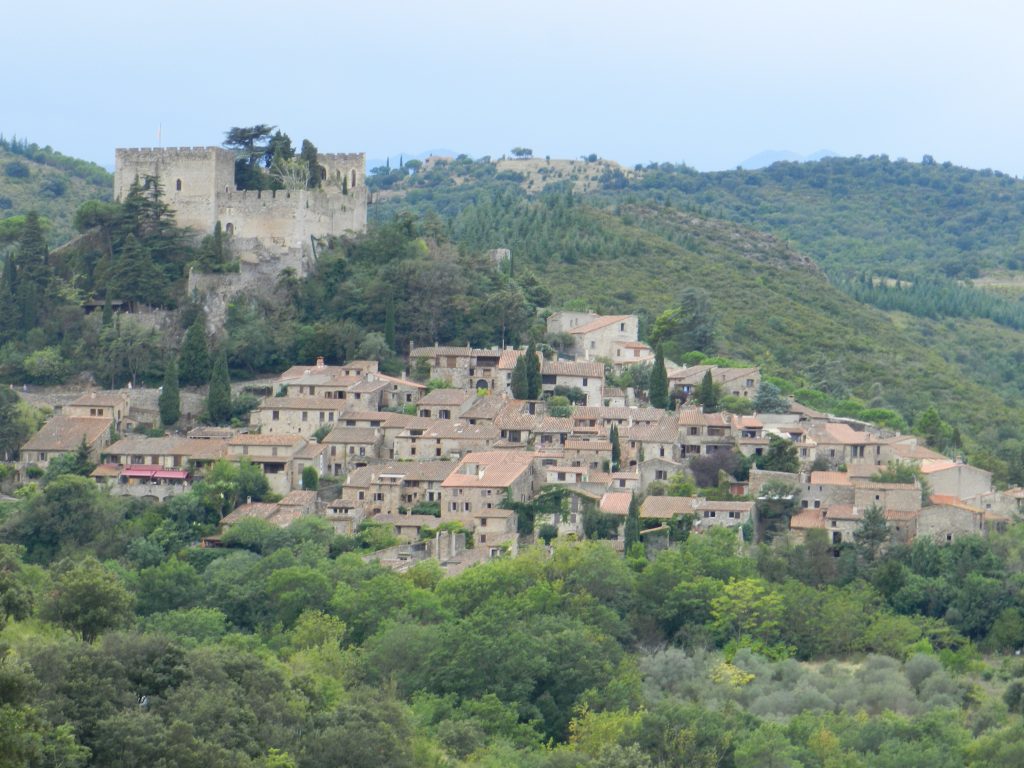 Nearby suburbs benefit from this amenity. Water can be in short supply and there was little rain in July and August and a major heatwave in June. It was very arid overall and the wine harvest was affected as well as vegetable production. The lake water can come into use if needed. We dined later at Canet de Roussillon the beach resort, with fine promenade and beach. The Hacienda restaurant had a 20 euro 3 course meal that was really good with sea food, excellent quality and value.Very nice for visitors they can stroll along the fine promenade or walk on the beach and see some sand sculptors at work there.
Beach bars were beginning to face the end of the season, with lots of choice. This is the beach of choice for the city people from Perpignan a city of 130,000 people and with great weather is busy for many months.
As we finished the day, we looked forward to exploring more of French Catalonia, both on the coast and inland.Hotel Canet has many accommodation possibilities hotels, bn bs and apartments.We stayed at Quality Hotel near train station in Perpignan, soon to be re named in January To Hotel Kyriad Prestige in Perpignan City Centre and is 4 star
Getting there
Aer Lingus fly direct from Dublin to Perpignan in summer up to end September, only 10 minutes from Perpignan city centre to airport, also a less frequent bus every hour or half hour depending on times. Barcelona is year-round with Aer Lingus and Ryanair fly there year-round. From Barcelona you can get a bus to Perpignan or fast train with TGV .in less than two hours