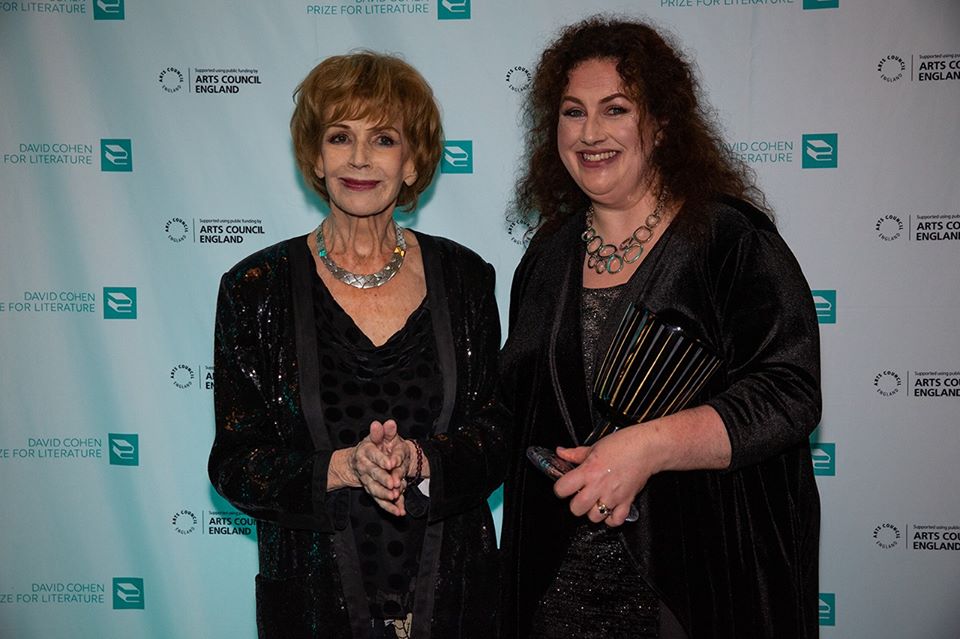 Waterford poet Clodagh Beresford Dunne has been awarded the Clarissa Luard Award for Emerging Writers.
Unveiled last Tuesday night in the splendid surroundings of Royal Institute of British Architects, London, the prestigious David Cohen Prize for Literature, 2019 was awarded to Edna O’Brien.Often seen as a precursor to the Nobel, the biennial prize with a prize fund of £40,000 was awarded to a living writer who has broken down social and sexual barriers for women in Ireland and beyond and moved mountains both politically and lyrically through her writing.
Edna went on to award the Clarissa Luard Award to Irish Poet, Clodagh Beresford Dunne. The Clarissa Luard Award was founded in 2005 by Arts Council England, in memory of a much-loved literature officer, Clarissa Luard. The award is worth £10,000 and the winner of the David Cohen Prize for Literature nominates an emerging writer whose work they wish to support. O’Brien said she first became aware of Beresford Dunne’s work when she heard her read at a literary festival a few years ago. Soon afterwards she hailed Beresford Dunne ‘A brilliant poet who loves language – a young poet with an old soul…By that I mean she has an ancient wisdom and thrust but also a modern, searching , brave sensibility.”
Speaking at the Awards Ceremony in London last week, O’Brien said ‘I chose Clodagh because I love her poems, and like every writer she deserves all the encouragement she can get.’
The Guardian quotes O’Brien as saying “I had many claims on who I would wish this prize to go to, including in Nigeria, so it was hard for me. But I decided to give it to a fellow Irish girl – well, she’s a girl and I am a woman – because I know how much she loves poetry.”

Beresford Dunne, from Dungarvan, Co Waterford, whose poems have already been individually published and broadcast internationally has several times read and been interviewed about her work in the U.K. and in the U.S.A. – she was part of Monmouth University’s noted Visiting Writers’ Series in 2018 and has previously been praised by major poets in the U.S. as being a ‘Courageous and necessary voice’ in international poetry.
Her poem written in the wake of the 2017 Las Vegas shootings: “A Call for Stringent Gun Control on the Grounds That Caution Should Rank Above Faith in Your Neighbour’s Judgement” is scheduled to appear in the January 2020 issue of Chicago’s century-old ‘Poetry’ magazine.
She won Irish poem of the Year at the 2017 Irish Book Awards for her poem ‘Seven Sugar Cubes’ which first appeared in The Irish Times – a poem written about receipt of news, in Ireland, of her father, Winston’s death while he was visiting her emigrant brother in Australia, in December 2015.
She was awarded the Arts Council of Ireland Emerging Writer Bursary in 2016 and has also received a number of awards from Culture Ireland, Waterford City and County Arts Office and Artlinks. Holding degrees in Law and in English, Beresford Dunne is a qualified, non-practising solicitor and was highly regarded as an international public speaker and debater during her university years.
She was born and raised in a local newspaper family – her grandfather Paddy Lynch was proprietor and editor of The Dungarvan Observer. In an RTE interview following the Book Awards in 2017 and, in public conversation with Dr. Niall MacMonagle in the National Library of Ireland on Poetry Day Ireland, 2018, she stated ‘Words were the family’s currency – they were handed down to each of us just like the coveted possessions of any family…we were taught that each and every word not only has its own definition, but it also has a texture, a unique and perfect resonance.”
In her acceptance speech at last week’s London award ceremony, Beresford Dunne made reference to her mother, Hilary, having read Edna O’Brien’s novels since ‘their days of prohibition’ and she quoted Flaubert, when expressing gratitude to Zafar Rushdie, son of the late Clarissa Luard and author, Salman Rushdie, who also spoke on the evening. She concluded by thanking the Arts Council of England.
When asked where she finds the time to write with four school-going children, Beresford Dunne says; “It’s certainly not easy. I mainly do my work in the middle of the night when it’s quiet and I have longer tracts of silence to do my thinking. It’s impossible to juggle everything, but I just try to do my best every day. I’m so grateful to God for The Clarissa Luard Award, it will help me on so many levels, but essentially it gives me encouragement to keep going.” As to when we can expect to see Beresford Dunne’s first full collection in print, she replies “Well, my full manuscript is just finished, so it’s basically in the lap of the Gods now.”