Home » Entertainment » Travel » Collioure: A Jewel in the Mediterranean

Collioure: A Jewel in the Mediterranean 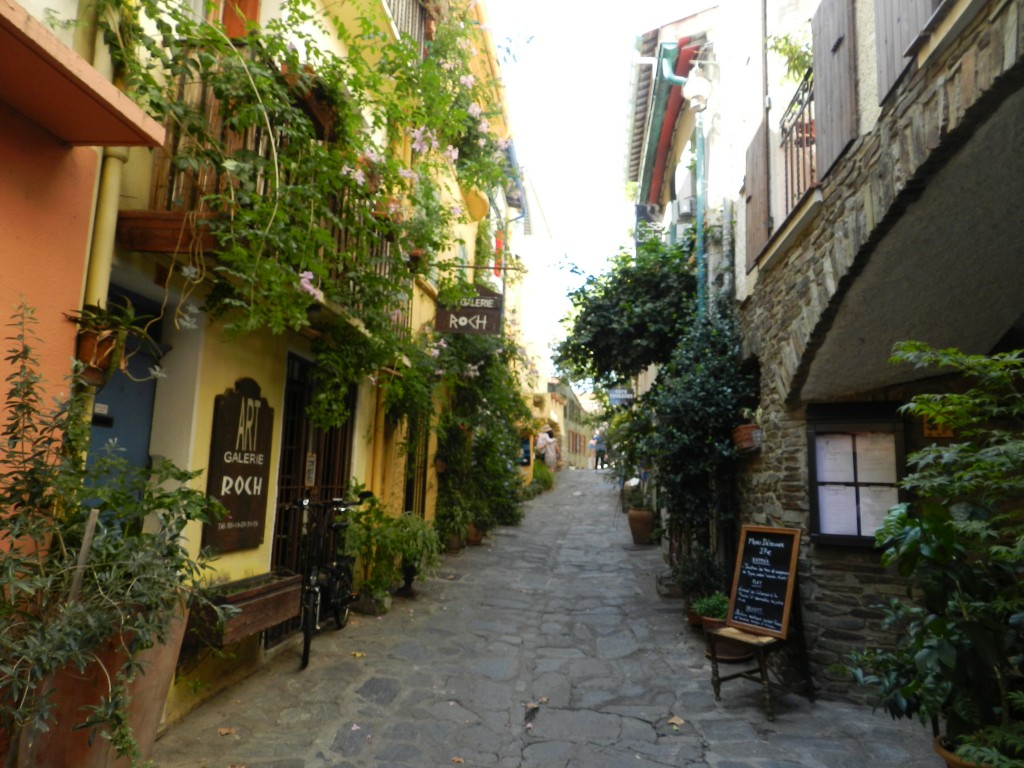 “In the whole of France, there is no sky as blue as the one above Collioure… I just have to close the shutters of my room and I have all the colours of the Mediterranean before me.” – Henri Matisse
If Dunmore East or Passage were in France, the renowned artists in that country, like Matisse and Derain would have gone there.They liked Brittany, the Celtic north west but also the south in places like Collioure, traditional fishing villages in south west France, we went there in early September, having heard much about it from Irish visitors.
In the heart of French ruby country and within sight of the Spanish hills, Collioure, is a Mediterranean jewel just waiting to be discovered.It is situated on a rocky coastline, like Waterford, this one is called the Côte Vermeille, just 26 kilometres (approximately 16 miles) away from the Spanish border and is Catalan also.
It is a living village with fishermen and vineyard farmers in its local, but is strongly growing in tourism but without massive hotels.This picturesque village nestles in the heart of a bucolic countryside and idyllic landscapes. The streets are so picturesque with brightly painted colours like Irish villages such as Clonakilty.
Its small Catalan harbour is sheltered by a quiet bay where the rocky foothills of the Pyrenees meet the Mediterranean Sea. The exceptionally sunny climate and the Northern Tramontane wind make Collioure a unique place, where wellbeing and the Catalan “art de vivre” take on their full meaning – ”The art of living”.
Film stars came here like Catherine Deneuve and Jean Paul Belmondo, great place for a film set, just like Dunmore East for Echoes on TV.
You won’t be able to resist enjoying a splendid swim at one of the small coves and several sand and pebble beaches, the crystal clear water was awarded the European quality seal for its purity.Collioure’s inhabitants have many festivals to remember their roots. Even today, the Catalan culture is maintained and passed on through language, dances (such as the Sardane), and music (for example, the cobles dance with musicians playing a historic instrument called the shawm).Collioure has always been a source of inspiration for all sorts of artists. Writers, poets, singers and painters have succumbed to Collioure’s magic and charm.That is also why Picasso, Matisse, Derain, Dufy, Chagall, Marquet, and many others set up their easels here and immortalized the small Catalan harbour in their works. With approximately 30 galleries and numerous artists from all over the world, Collioure remains today the “City of Painters.” 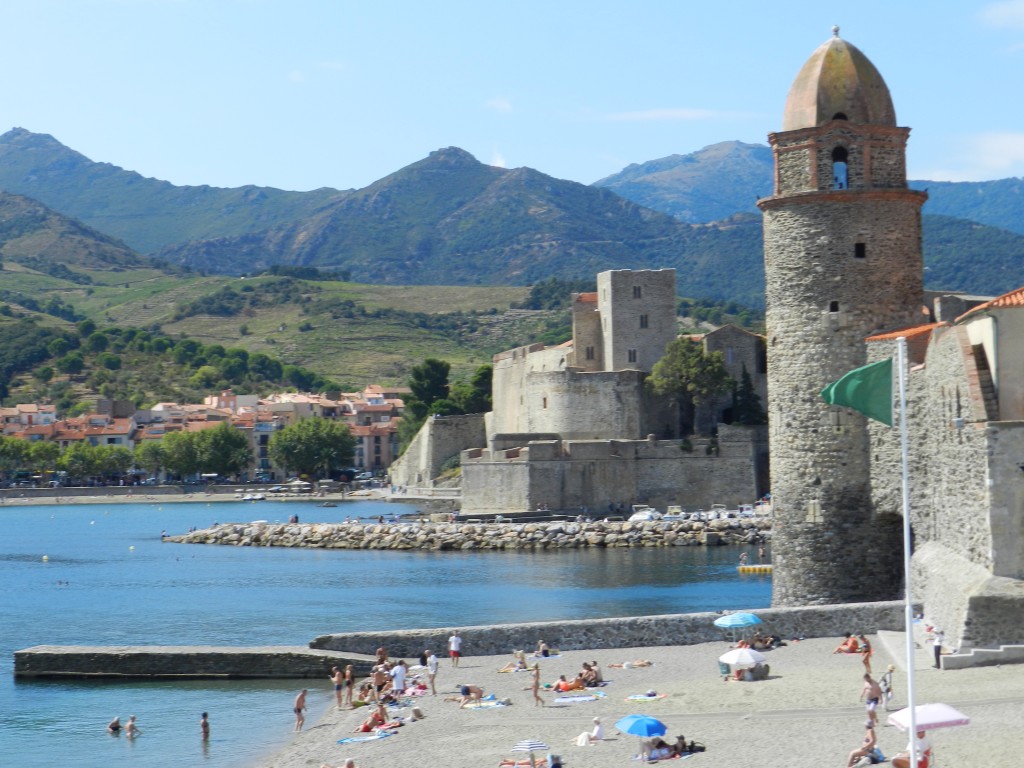 The Museum of Modern Art in Collioure
The Museum of Modern Art in Collioure was founded by Jean Peské in 1930. In the 1980s the municipality of Collioure acquired and restored Gaston Pam’s property so that exhibitions could be held there. These art works came into the community’s possession mainly through donations (by Balbino Giner, Descossy, Perrot, Baloffi, Cocteau, and many others). Since then, exhibitions of contemporary artists have been promoted by the city of Collioure.We visited it on way back from the Fort Elme Tower , with local artists form the 1940 and 50s feature with great old pics of fishermen Le Chemin du Fauvisme (The Path of Fauvism )Henri Matisse and André Derain found their way to Collioure in 1905.In 1994, the association “Fenêtre Ouverte sur le Fauvisme” imagined and created a pedestrian circuit displaying reproductions of their paintings during their stay in Collioure.
Now visitors can stroll along “Path of Fauvism” and enjoy guided tours throughout the village, walking in the footsteps of these two Masters who initiated the first artistic movement of the 20th century. This is probably the top thing to do. Guided tours are possible all year round with Dutch guide, Cleo, daughter of MEP and friend of John Hume, who knew her Dad, Mr. Dankert in the Euro Parliament in the 1980s, when he was President.Numerous sailors from by gone times, the Ancient Phenicians, Romans and Greeks travelled to Collioure and left behind a rich archaeological heritage. In 673, Collioure was occupied by Wamba, King of the Visigoths. He named the place “CAUCOLIBERIS” (Port of Elne) and in doing so confirmed its importance as a trading port.From 981 onwards, the Counts of Roussillon and the Kings of Majorca further built at Collioure, constructing a fortress that served as the summer residence for the Kings of Majorca from 1276 to 1344.Throughout the entire 13th century, numerous crusaders passed through Collioure: for example, the Knights of the Templar order (hence the famous legend of the treasure of the Templars) in 1207, the Cistercians in 1242, and the Dominicans in 1280. Later, the discovery of America in the 15th century led to the progressive decline of the port of Collioure.From 1462 to 1493, Collioure was under French occupation during the reign of Louis XI. In 1642, after the Catalans had freed themselves from Spanish supremacy, Collioure again fell into the hands of the French. During that period, Sébastien le Prestre de Vauban (1633-1707), a French officer who built fortresses under Louis XIV, altered the fortifications, giving Collioure its current appearance. The Pyrenean Peace Treaty of 1659 tied the Roussillon region to the French crown for ever.With its ideal location between mountains and sea, there are a multitude of activities to enjoy in Collioure, from swimming in its crystal-clear waters and relaxing on its sand beaches, pebble beaches and little bays to going on a tour for nature-lovers… Great swimming we can add.Activities include: diving, snorkelling, pedal boats and canoe rentals, paddle boarding, fishing, deep-sea fishing competitions, tennis club in the village, walking, hiking, climbing, playing boules, boat trips and bus tours to explore the region. and Collioure
We hiked to the St. Elme Tower and kayaked in the harbour.
Places to eat and drink
Locals go to Café Sola, ask for Laurent. L’arbre de Voyageur, at Place Jean Jaures, nearby Lalluria restaurant and la voile, Fefe Wine Bar, La Plage des Mouettes.
The best meals we had were at Les Templiers, near the harbour Great sea food and amazing paintings inside and photo of Picasso , who visited Collioure and ate there. We are great local sea bass and tourons glace, dessert.Some of his paintings got stolen afterwards one night. Dali was another visitor from nearby Spain.
The poor painters used to ear there and allow them exhibit sell paintings from there, trend that spread elsewhere. Salvador Dali from nearby Spain also loved it here.
Our Dutch guide said in some ways Collioure is a little like Clonakilty with the colours but better weather. She visited Dutch writer Martin Toonder, who lived there in West Cork at one point and knew her Dad back in the 1980s. Some say Collioure is a little Montmartre with its hills and art. Put the place on your bucket list. It is a little Bohemian and less chic rather than bling bling. Look our for Petit Louis, the 94 year old retired fisherman at Café Sol, he has a workshop in the village and makes model boats. We stayed at the nice Mas de Citronniers, very comfortable and quiet with pleasant staff and good breakfast.
History of Chateau
The Château Royal was built on Roman foundations and is the centre of Collioure’s fortifications. The main construction work took place during the reign of the Counts of Roussillon and the Kings of Aragon between 1276 and 1344. After being the home of the Majorcan court, the fortress was occupied by the Spanish until it fell back into French hands again in 1642. Vauban , the famous military architect of King Louis 14th, then had the outer city wall built and the rampart destroyed (where the car park is now). In 1922 the Château, which by then had been declared a historical monument, was completely restored. The Germans had been there also during the WW2. Today French army and navy marines do training here in the harbour.The Church of Notre Dame des Anges is worth a look too very ornate with lots of gold paint. 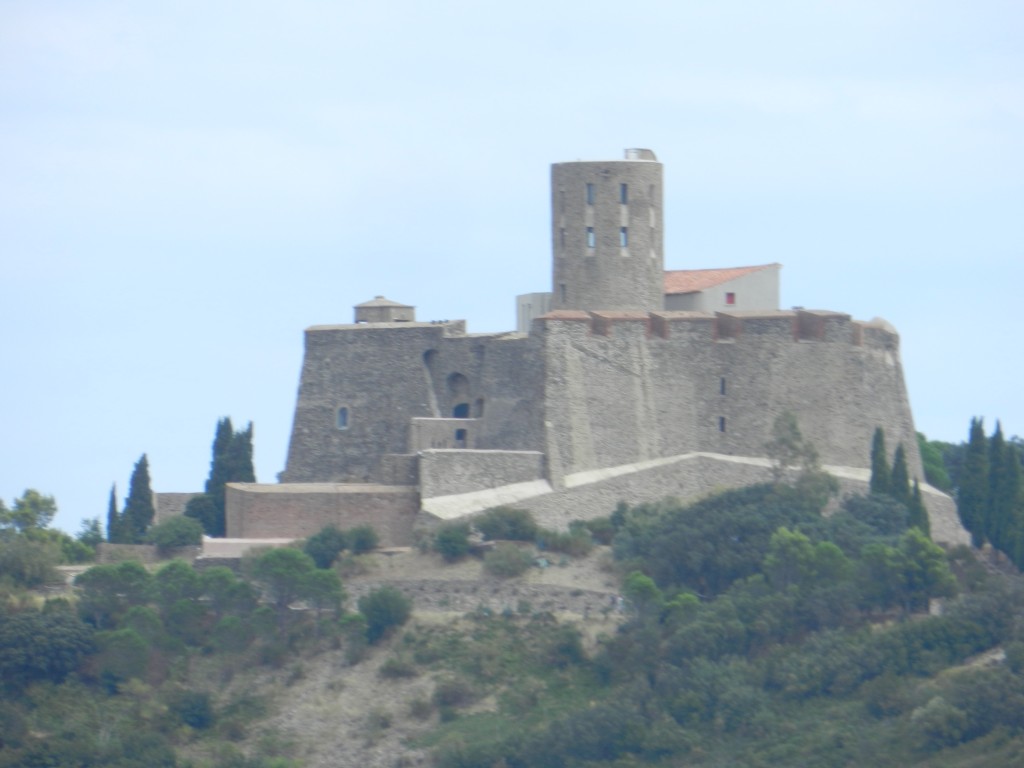 We got the local small train up the hills with great views up to and from Fort Saint Elme (16th Century).A nearby Windmill (14th century) was restored in 2001 and is now used as an oil mill can still be seen among olive trees.We bought some excellent local virgin oil, at the Moulin St. Pierre shop in the village, also special salad vinegar too.
Some wineries also in the village for tasting and buying the banyul or red wine. Try the Rose Llan, we were told.The village also has anchovy fish factories, which you can visit and order some tinned purchases for home.It is thus a working village and not a tourist trap but does get busy in peak hot summer months, said our Scottish friend, Donald, who has a home there. Some Irish have holiday places too and these can be rented also. If you want to go inland go and see Laroque and dine at Café des artists where Fergal from Enniscorthy will organise a great meal, do a winery on the way and see Banyul being made. This is the fortified wine – and the beach resort of Argeles is nearby. Food can be a little like Spain with fish stews and casseroles, ollada or ouillade, gazpacho is another cool soup from Spain. In Collioure, other places to eat are the plage nouettes or la Voile. Head for the mountains also and the Pyrenees /Spain are close at hand too ,while hiking paths to the Elme Tower and Port Vendres are also worth checking out.
Getting there
Air France go to Paris from Cork or Dublin and connect to Perpignan Airport- you can take the train or bus from Perpignan.
Return fares via Paris Charles de Gaulle for €139 from Dublin and €189 from Cork, Also Barcelona an option via Aer Lingus and Ryanair and then train to Perpignan. By train to Perpignan on the TGV from Paris Gare de Lyon is another option.
Driving is possible via Cherbourg but over 800km/a two-day drive. Flying and car rental is better value, taking the A9 from Paris, exit Perpignan south then go to Argeles Sur Mer on the RN 114. Camping is also an option at nearby Argeles, where there also hotels and B&Bs there. There’s also cheaper accommodation in Perpignan (inland) with hotels charging just over €100 nightly on average.