The Subtitle Spotlight European Film Festival ran in Kilkenny between November 19th and 25th and, in what was our third visit to the event, proved a great success. We were enthralled by the two movies that we attended. The first one from Sweden, ‘The Square’, which featured some English, dealt with an exhibition hosted by an esteemed curator of a national gallery in Stockholm. The movie, directed by Ruben Ostund, featured Elisabeth Moss (of ‘Mad Men’ and ‘The Handmaid’s Tale’) and Dominic West (‘The Wire’ and ‘The Affair’). Screened at the Watergate Theatre, the film deals with a controversial marketing plan for the exhibition as envisaged by a young digital team, which descends all involved into a crisis. 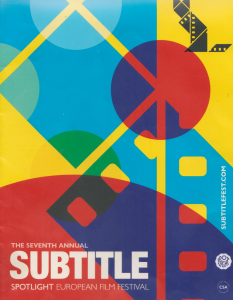 The solitary lives of Swedes and misguided idealism are all dealt with in a film which also offers a humorous look at “cynicism in the modern world”.Another film we managed to see on our visit was ‘C’est La Vie’, a great French movie about an old Parisian wedding planner hosting a wedding in an old fashioned French castle featuring the band, its caterers, as well as a photographer, who has a dalliance with the groom’s mother.
Shown in the Cinemobile on Parliament Street, we really enjoyed it: the film by Olivier Nakache and Eric Toledano took you behind the scenes of organising a wedding with a very egotistic groom seeking both perfection and a theatrical show – and he certainly got it!
Max the wedding planner (Jean-Pierre Bacri) is short staffed and has to find stand-ins, some of whom are off the books: he suspects that a tax investigator is at the wedding and he makes some of the staff guests at the wedding to get around that issue! The movie features an ending that has to be seen to be believed and proved very entertaining. While at the festival, we also met Norwegians and Finns, some of whom were producers while others were wishing to hire actors. Well done to Richard Cooke and his team for continuing this film festival, now in its eighth year. This is the only subtitled film festival of European movies in Ireland, with 22 shown in total. You can find out more on www.subtitlefest.com.