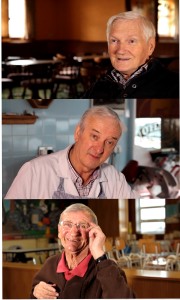 Waterford Youth Arts and Keith Currams launched their film project ‘Down the Town’ with a second screening of the work (the debut screening taking place first on 18th October) and a DVD launch at St Patricks Gateway Centre last Sunday 8th November. The project is the culmination of an Intergenerational Arts project supported by Waterford Council that led to the production of the social history documentary film.
“It’s great to get this down as future generations won’t know what Waterford was like” commented John Aylward of the Wander Inn. John is one of the many contributors to the film. Memories are shared, stories are told and life in the inner city and film maker Keith Currams and researcher Bridget Greenslade were challenged to create the double disc DVD that is ‘Down the Town’ .
Contributors include Liam Murphy, Tony Fitzgerald, Tommy Deegan to name but a few with great stories from John and Judy Flynn about going to the Olympia and ‘the picture house’ as it was called. ‘Down the Town’ aims to recall life and business about the heart of the city; about how most businesses were run by families who lived over their businesses.
‘Down The Town’ double disc DVD is just €10 and is available from Waterford Youth Arts at the Arch Barrack Street and The Book Centre.