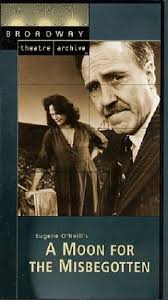 The first Irish performance of Eugene O’Neill’s A Moon For The Misbegotten will be staged at Waterford’s Theatre Royal on 10th-12th March, before transferring to Lyric Theatre Belfast and then on to Geva Theatre Center in Rochester, New York. An international cast and creative team is involved with the production, which is being brought to the city thanks to the support of the Waterford business community in conjunction with their counterparts in Rochester and Belfast. Director Ben Barnes has drawn together a cast from both Ireland the US that includes Don Mackay (Modern Family, Elementary), Broadway actress Kate Forbes (The School for Scandal, for which she received an award for Outstanding Broadway Debut), Irish actors Mark Lambert and Waterford actors Michael Quinlan and Cillian Jacob.
We caught up with 20-year-old Cillian as he entered the last week of rehearsals to hear his take on the play.
“I’m playing Mike Hogan, the brother of Josie, the main character, who’s a domineering woman with a bad reputation. He’s ready to leave the farm, he’s sick of being pushed around by the strong characters of his father, Phil Hogan and Josie. He’s a very pious young man and definitely has an air of superiority about him. He believes all the others are sinners and he wants to get away from that life. He finds it really appalling that Josie embraces the life of sleeping around. But he also really cares about his family and he wants the best for Josie. He does believe in his heart that she can be saved.”
Cillian lived in Galway until he was ten, when his family moved to Waterford. He became involved with Waterford Youth Arts in his early teens, performing in plays every year throughout secondary school. He’s also performed with Spraoi and in two secondary school musicals. His most recent roles were Dr Gibbs in Our Town; Reverend Parris in The Crucible; and Danny Zuko in Grease.
“I loved the shows with Waterford Youth Arts and then I got to work with Jim Nolan on Our Town, which was an absolute please. That’s how I got this role, I was invited to audition after the play with Jim. I decided to take a gap year after school because, even though I love acting, I wasn’t completely sure it was what I wanted to do with my life. It’s a big decision to make. But after the shows I’ve worked on – and the people I’ve worked with – over the past few months, I’m now completely sure that this is for me so I’ll be applying to drama schools for next year.
Amongst the actors working with Cillian on A Moon for The Misbegotten is Don Mackay, who has been a guest on countless TV shows, including Modern Family, Blue Bloods, Law & Order: SVU, The Good Wife, Weeds, Drop Dead Diva, N.C.I.S., Criminal Minds, Mad Men, House, Scrubs, The Practice, Star Trek: Enterprise, The West Wing, Frasier, Malcolm in the Middle and What I Like About You. Cillian says he’s relishing the opportunity of working with Don and the other experienced actors on the show.
“I’ll get to go to Belfast with the production but not the States, a young American actor will play the part over there. It’s still a great opportunity for me, working with such incredibly talented and lovely people. I haven’t done many big shows yet so I’m learning so much from them, they’ve done so much.”
A Moon for the Misbegotten, considered a sequel to O’Neill’s Long Day’s Journey into Night, has been nominated for Tony awards in 1958, 1973, 1974, 1980, 2000 and 2007. Gabriel Byrne was nominated for Tony Awards Best Actor in his role in the 2000 production. He won Theatre World Awards Best Actor the same year in that role.
Waterford became a sister city to Rochester in 1983 and throughout the years this connection has been nurtured and supported by the Waterford Business Group and Waterford City Council. This has led to significant developments in areas such as business, sport, charitable causes and education. The Twin City business leaders seek to foster a tradition of generating world class arts events that underline the richness of the cultural offering in these regions. Of this Waterford-Rochester initiative the Artistic Director of the Theatre Royal, Ben Barnes said the play was an appropriate choice to bring to the two cities.
“O’ Neill’s father hailed from our region here his family having a land holding near Rosbercon, New Ross and O’ Neill himself was born in New York and had strong links with its immediate hinterland. In light of Waterford, Kilkenny and Wexford, (The Three Sisters) being shortlisted by the EU as a contender for the European Capital of Culture for 2020, this production is a great example of international cultural collaboration.”