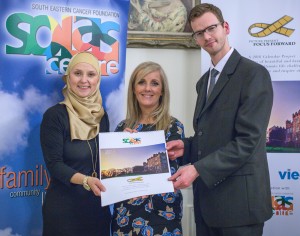 The launch of the Solas Centre’s 2016 Calendar at the Theatre Royal on Thursday, November 5th, caught all of its subjects completely – albeit happily – offguard1
Maria Quilty, who is one of the 61-strong team of volunteers helping out at the Solas Centre, said the night “is one none of us will ever forget. It’s hard to put it into words, really”.
Maria, whose experience with cancer was detailed in last week’s edition, was part of the group which took part in the 2016 Solas Calendar ‘Picture Present Focus Forward’ campaign, which “captured stories of beautiful and brave people, met by the ultimate life challenge yet willing to share and inspire others”.
The Ferrybank resident, thankfully now on the other side of the breast cancer she was diagnosed with in 2012, was part of a project which involved a photo shoot with Bara Alich and videography with Jan Lukac.
Maria added: “We knew something was going to be done to mark the launch of the calendar, but we’d no idea what. So we were all out at the Solas Centre, when someone said ‘I wonder are we going to be brought into the theatre in limos’, sure we could have been going in on a bus for all we knew, but sure enough, when we out into the car park, there was a fleet of limos and two vintage cars, and it was fabulous.
“And then we arrived at the theatre, and there was a red carpet, with photographers all lined up – sure it was like the Oscars! And then the theatre as full, 400 people in there, and it was hard to take it all in. And then we saw our videos and we were presented with our portraits up on the stage – it was lovely.
“Bara and Jan did an incredible job, as did all the team at the Solas Centre. It was wonderful.”
Said Solas Centre Fundraising Co-ordinator Ann Marie Power: “The launch was all about us giving our calendar participants a truly special evening, something they will always remember and treasure as will their family members and friends.
“The plan for the launch was kept as a total surprise from the participants, they had no idea what was organised and this was the first time they would see their photos and the project video. It was a very powerful and memorable evening as the bravery and positivity of our calendar participants shone through to inspire all on the evening.”
Marie added: “I’m one of the lucky ones. I’ve come out the other side of cancer, and my family were just wonderful the whole way through. All I can say to people facing what I faced is to try and be positive and try to live as much you can. Being positive helps.”