Michelle Clancy
Arts & Entertainment Editor
Young musicians are sought to represent Waterford in the Irish Youth Music Awards…
Young Waterford musicians aged 14 to 19 years are currently being sought to represent their county at the Irish Youth Music Awards 2016.
The Manor Street Youth Project is putting together a team of local young for this year’s awards, with groups from different counties each sending forward an act and support team to the Aviva Stadium in Dublin to compete for the opportunity of recording an album for all their local acts.
Whether you’re a budding singer, band, musician or songwriter, or you just want to a ‘real life experience’, the national music-based programme is a great initiative, according to youth worker Mary Connors. 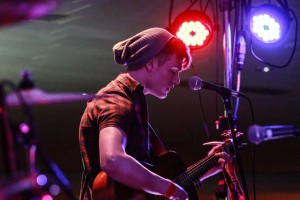 Steven Heatherton, who represented Waterford in the 2015 Youth Music Awards.

“The great thing about the Awards is that it’s not based solely on the talent performing on the day. There’s a huge group effort involved and this is all taken into account in the judging process. It’s a great opportunity to build young people’s confidence.”
Last year, over 15,000 young people across the county engaged in the Youth Music Awards, with the overall champion receiving recording time in a studio and they produce an album of their own. Because the programme is entirely youth-led, the young people involved gain entrepreneurial and leadership skills while doing something they are passionate about.
“We find the project great for giving young people an insight into what the music industry is like. And it’s not just the act who is selected to represent Waterford that gets to benefit from this. One act is chosen but all the remaining acts in Waterford who entered then become part of the support team. There are 23 jobs in total allocated, everything from promotion to sound engineering and fund-raising. Everybody has a part to play towards the overall prize, with the act, the crew, the promotion and approach to the competition all taken into account. So it’s not just for singers and musicians. Young people with an interest in other areas such as photography, media or who would just like to join the support team are welcome also. All musical tastes are welcome from rock, mental, county, pop and rap. Each act must perform one original song and a second song of their choice, original or cover. “
“The programme aims to build confidence, showcase talents and provide new experiences while making friends in your community. It is a chance for young music lovers to show what they have to offer and have fun doing it.” 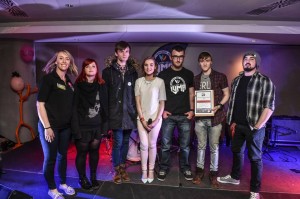 Members of the Waterford team collecting an award for the support team at the 2015 event.