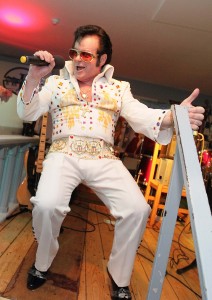 The local legend that is Rocky Mills marked his 75th birthday by bringing the house down at the Hi-B in Tramore last weekend.
Rocky has been impersonating Elvis Presley since 1957 making him – arguably – the world’s longest-running and oldest Elvis tribute act. So much so that the Guinness Book of Records is currently considering his application to include him in their volumes.
While most Elvis artistes only came on the scene from the 70s onwards, Rocky’s first gig was in the Arundel Ballroom in Waterford in 1957, just a few months after Elvis became a star. The difficulty, however, is proving just how long Rocky has been entertaining generations of Waterford audiences, since posters and accounts of his early gigs are rare. Many fans have come forward with accounts of Rocky’s early gigs. Unfortunately the Guinness Book of Records has yet to recognise Tramore’s answer to The King.
Undeterred by what we hope is just a delay in his application being recognised, Rocky took to the floor at the Hi-B to entertain the friends and family who had gathered to mark his 75th birthday. Long live The King…..