Holiday World Show 2020 at the RDS

Holiday World Show Dublin returned for its thirtieth year at the RDS, Simmonscourt Dublin.
Minister for Tourism Shane Ross made a flying visit there on Friday last for the official opening, in support of home tourism and noted the great attendance at the show. 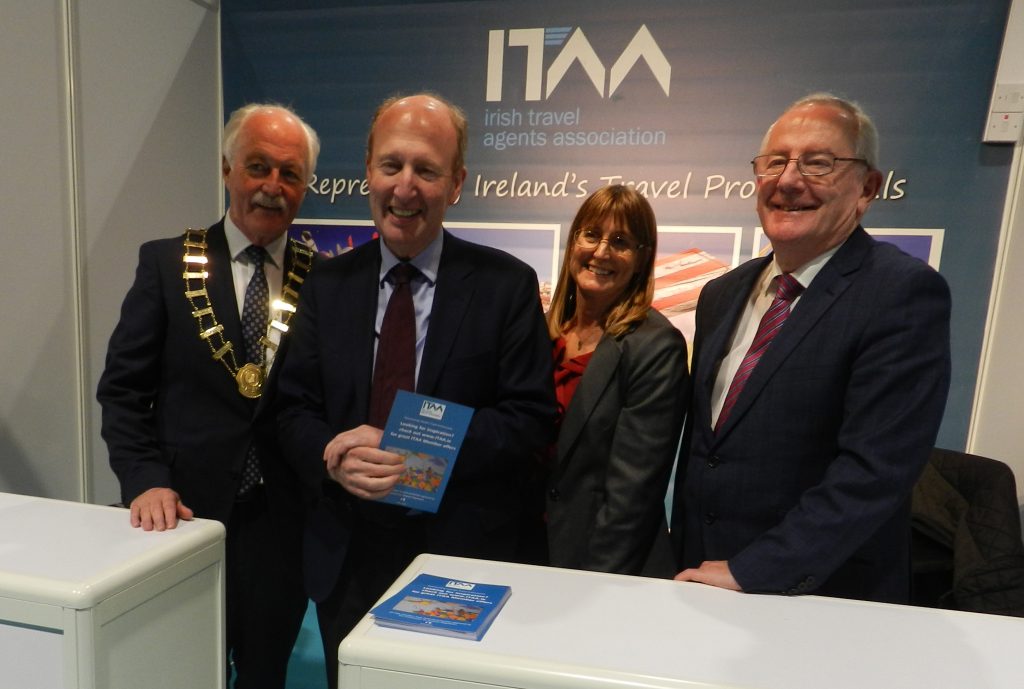 He did not get to the Waterford stand, despite a special request, as he had to rush off for canvassing but that was understandable. He told the Munster Express that Waterford TD
John Halligan would be joining his canvass on the Saturday in his Dublin South constituency.
The Friday show numbers for Waterford and other stall holders were up and the fine day compared to last year brought visitor numbers out.
Waterford were doing a special food promotion on their larger Waterford stand , where House of Waterford Crystal also took space and displayed some of their wonderful golf crystal trophies, with Jimmy Kelly doing the display, Sinead Corcoran from the Tower Hotel was also there, Caroline Prendergast from Tramore and Waterford Council plus Lismore Heritage Centre, Mella Fahey from Lismore who gave us a turn on the VR county view of Kilmacthomas and Lismore where a dressed up Fred Astaire and Adele Astaire, sister, who married a Devonshire were on VR . JF Kennedy visited Lismore in that period when his sister had married a Devonshire in the late 1940s.
Deputy Mayor of Dublin, Tom Brabazon visited the stand and praised it. Greenway got good comment with more going back to it, a good few blaas enquiries too and recognition of the Waterford Foodie award noted Eibhlin ni Conchubhair from Ring and Waterford Council.
The Japanese Gardens got good mention after a big TV boost in past week with Nevin Maguire and his sea food trails show.
Cork had a great display with new attractions like the MI Collins house, the Lusitania museum and old Crosshaven Barracks, Galway were pushing the Galway county of Culture 2020 for Europe.Donegal also well represented and the North.The Galway City of Culture is to happen from 8/2/2020. 80 per cent of the events are free,and half are in the county and half in city, 6 county towns and villages involved in the grand opening on Saturday.
Over 1,000 travel professionals, representing over 60 countries including, Africa, Asia, Middle East, Caribbean, Europe, South America, USA, Canada and the island of Ireland. There were over 60 travel agents and tour operators offering holidays in Adventure, Activity, Safari, Luxury, Family, Home Holidays, 50+, Rail, City Breaks, Escorted Tours, French Campsites, Golf, Cruise River and Ocean, Spa & Wellness, Wedding & Honeymoons and Youth Travel or Staycation. 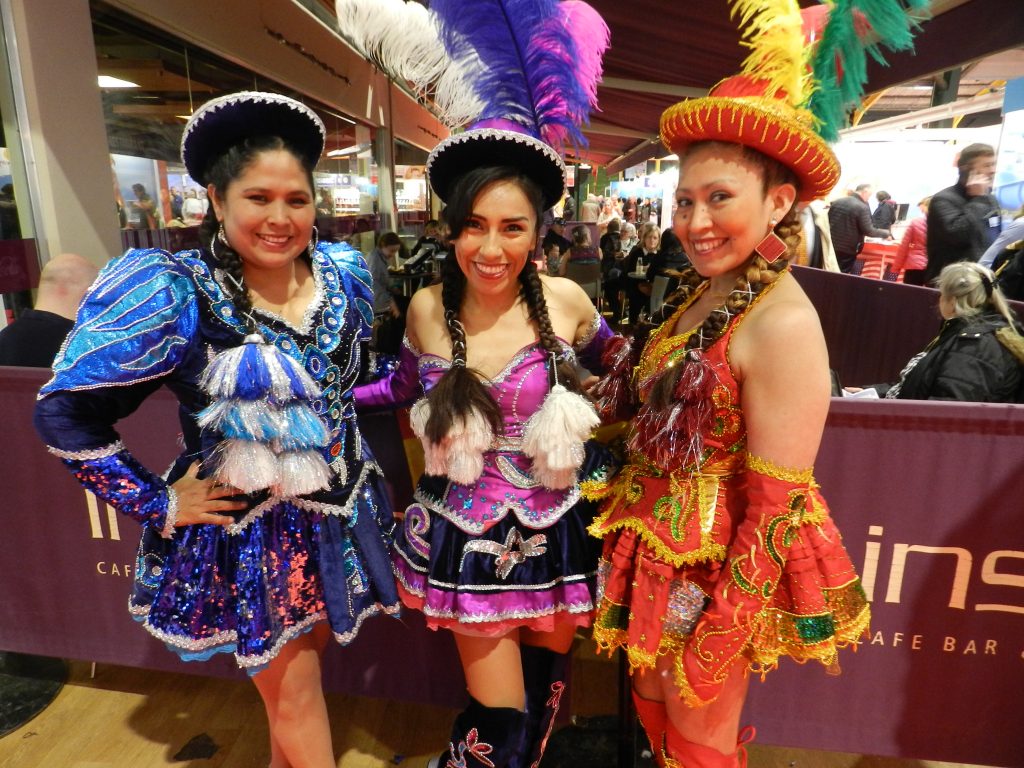 New Exhibitors
The Caribbean island, Jamaica were in attendance allowing you to uncover the magic of the birthplace of reggae. Guests can travel the length and breadth of Barbados, we met with Marc McCollin there and he told us about a special Celtic festival they have in May with Irish and Scottish music. Montserrat, another island with much Irish connections has a St. Patrick’s week festive one in mid-March. Also exhibiting were Bahamas- fly via London, Cuba, St Lucia and the Dominican Republic.
Asia there too with China, Malaysia, Thailand, Japan and Korea, who were very hospitable and doing some Korean calligraphy lettering for some visitors to the stand.
Adventure Holidays
Adventure holiday experts advised those with the adventurous spirit. Whether you’re a seasoned overseas traveler or making your ‘international debut’, the Holiday World Show is on a mission to help visitors experience the world in an authentic and exciting way.
Camino Ways were promoting the Irish Camino as a starter point for the big one in Spain.
You can do 230 km here to count for Camino passport in Spain, Kerry are on the schedule and now St. Declan’s Way in Waterford and Tipperary.
Tucan Travel do 200 tailor-made experiences that reach over 78 different countries. Their destinations span across South America, Central America, Europe, Africa, The Middle East & North Africa, Asia and Antarctica. G Adventures offers the craving traveller an alternative to the resorts and cruises they were accustomed to. Their National Geographic Journey is a collection of unique tours designed to take you deeper into the cultures and habitats of the places we explore.
With Wendy Wu Tours the world really is your oyster. If you want to experience immersive adventures and truly memorable experiences in far-flung corners of the world.
Exodus Travel will not let you down when it comes to seeking travel inspiration for your next activity holiday, soak in the awe-inspiring scenery and breathtaking wildlife encounters.
We met with Ethiopian Airways and they have many options from their Dublin Addis Ababa service to reach Africa with 484 euros fares to Nairobi, Kenya. They offered lovely Ethiopian Coffee, the home of coffee.
Portugal, Italy, Greece and Spain plus central Europe had much presence from Austria to Croatia, Slovakia. Canada and USA had great stands there too, where you could learn about various US states from New York and New England to the south and New Orleans to Florida.
Home Holidays
The Lonely Planet called Northern Ireland the world’s number one region to visit. This magical part of the Emerald Isle is home to the infamous Giant’s Causeway in Co. Antrim, Mussenden Temple, Co. Derry, the Glens of Co. Antrim, the Carrick-a-Rede rope bridge and the rugged landscape of Rathlin Island. Let your mind wander and discover tranquillity and beauty like never before. In amongst this host of special experiences, Northern Ireland remains the cardinal destination for Game of Thrones fans.
Hosting world-class events, including July’s 148th Open, in Royal Portrush, and home to some of the most stunning scenery you’ll ever stumble across, you’ll want to make sure Northern Ireland is top of your travel bucket list. John Spollen, President of the Irish Travel Agents Association, stated, “Holiday World Show has become a powerful institution for the Irish public. It is wonderful to see so much support year on year and the positive effect it has to the travel industry in Ireland.”
Maria Hourican, CEO of Holiday World Show, commented, “As we enter our thirtieth year, we are feeling very proud of everything we have accomplished to date.”Paul Kelly, CEO of Fáilte Ireland, commented, “Each year, Holiday World Show provides us with a fantastic opportunity to showcase Irish Tourism. This is a wonderful chance for Irish travel and tourism professionals to come together with overseas travel experts to celebrate tourism in Ireland. Fáilte Ireland is delighted to be here to help Holiday World Show celebrate its 30th anniversary.”
Pat Dawson, Dawson Travel told the Munster Express that the travel agents can now provide online booking and with their bonding system can give customers a guarantee that non bond holders on line cannot match. They have over 100 members and employ over 2000 staff if you count Club Travel and other larger agents and operators with 140 branches across the country and can provide advice and training for staff and customers, said the website.
Spain
Spanish Tourism again hosted the press journalism awards night, which was very well attended.Lanzarote was promoted heavily at this event with Hector Fernandex Machado highlighting sustainable tourism on the Canary Island, where there are direct flights to Dublin and Cork. You can now do special cycling there on new paths with electronic bikes, the latter are ideal for going up hills and mountains on this volcanic island, which is most popular among the Irish, who are among the top visitors there in number terms. Some would like a return to extra Irish flights was one comment at the show.
Ireland is a top country for going to Spain too with 2 million going there annually.It is Spain’s fourth fastest growing market after USA, Russia and Portugal.Tour Spain director, Ruben Lopez Pulido told the gathering that Irish numbers were up 6 per cent, reflecting continued popularity in Ireland with many having multiple visits.The Camino is also a big draw for the Irish and was referenced by Eoghan Corry of Travel Extra in the presentations of awards. Barcelona won the best city break destination in the ITAA awards dinner the night before.