Your Library – Take a Closer Look

A new national advertising campaign is asking everyone to take a closer look at what their local authority library has to offer.Waterford Libraries and all public libraries around the country are joining in the campaign, which is running for the next four weeks across radio, cinema, TV on demand, digital and social.

The aim of the campaign is to encourage people of all ages to join and use the library.
Speaking about the campaign, Jane Cantwell, Waterford City and County Librarian said, “Many people who use the library regularly know how great it is. But there are those who haven’t been in a while or don’t think there’s anything there for them. This campaign is inviting everyone to have a look at their library.” 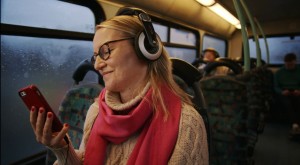 Tracy McEneaney, Executive Librarian with Waterford Libraries who features on the advert using the free borrowbox app available to all Waterford Library members which gives you access to free eBooks and eAudiobooks anywhere.

The ‘Take a Closer Look’ campaign was devised by the Libraries Development Unit of the LGMA with the support of the Department of Rural and Community Development. It is part a wider national strategy to increase library use in Ireland.
At present, around per cent of the Irish population are library members. The ‘Our Public Libraries’ strategy aims to increase that to 30 per cent by 2022.