‘Murder of Crows’ is a compelling – unmissable – new drama, coming to Garter Lane on February 13th, 14 and 15. Woven together by Dublin writer Lee Coffey, Murder of Crows skillfully spins numerous narratives into a single exploration of the connections formed between three young delinquents who flock together in their knowledge that “secrets hide in the dark places and darkness, once gazed upon, can never be lost”.
The show is brought to Waterford by Dublin based Theatre Company, Theatre Upstairs who make their first visit to the South East. 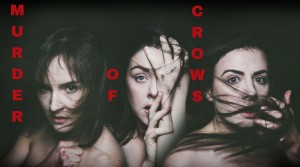 The independent company is the only theatre in Ireland committed to solely staging the world premieres and Irish premieres of new plays, purpose built for the creation of contemporary work and devoted to pushing the boundaries of design within an intimate space.
In Murder of Crows, Coffey taps into the zeitgeist of teenage life in Ireland, with three school girls trapped in a savage exchange of heartbreak and hope during a weekend away from home none of them will forget.
Aisling O’Mara, Amilia Stewart and Katie Honan feature in an impressive ensemble performance as the three girls. The show is directed by Theatre Upstairs Artistic Director Karl Shiels, better known to many as Robbie Quinn in RTE’s ‘Fair City’.

Murder of Crows will have two evening performances at Garter Lane, February 13th and 15th. A matinee performance on February 14th will be followed by a ‘Meet the Makers’ workshop featuring a conversation with the creative team who produced the play.