Imagine Festival: A feast of contrasts 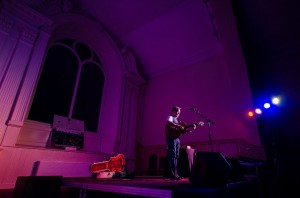 Martin Simpson playing in concert at St Patrick's Gateway Centre playing to a capacity audience during the 2015 Imagine Festival.

Arts Festivals are a great place for contrasts, giving audiences a chance to see a variety of events and an opportunity for theatre companies to do tried and trusted work like the oddly named Ranting Rebels presenting Hugh Leonard’s ‘Da’ or a new company, Gasworks Productions doing a new play, ‘The Staff Room’. One reassured; the other asked the audience to “leave sanity at the door”.

Written and directed by Jamie John Patrick Flynn, ‘The Staff Room’ was set in a 70s Secondary School staff room, and the social satire it sets out to portray is best described as; American Psycho meets Killinaskully.
There was talk of teacher brutality, tae without milk, 14 pupils dead in a massacre, a headmaster being persecuted, ‘Penis Boy’, nuns and laundries, ‘Happy Days’ marathons, crude expletives, cross-dressing, politically incorrect language that set out to be controversial and TAC (Teacher’s Against Change).
At Central Arts up Andy Jordan’s Lane, there was a pre-show scene setting, so the play had started before it started and in a sense it had ended long before its running time of 150 minutes with interval ended.
After a slow rambling, almost stage ‘Oirish’ hour in a Staff Room an American guru arrived to restore order and discipline. This Man in Black with lots of sunglasses laid down the law. A character said: ” I will f*cking kill you”, and the audience were unsure it was the interval when it was.
After the interval, it got worse with the best joke a waterboarding attempt with a ball-gag and a jug of imaginary water.
The set moved on castors, and there was talk of premature dropping down of testicles, Alpha males in a man eat dog world. The word ‘retard’ was used and a Flip Chart scene was excruciating. It ended, and there was some enthusiastic applause.

The Ranting Rebels Theatre Group brought Hugh Leonard’s ‘Da’ to Garter Lane, and touched many a painful memory and yet brought smiles of recognition as Charlie comes back from England to close up the house after his father’s funeral.
This is a classic Irish play and Fergus Cooper as director paid it due respect and even had a ‘cut-down fourth wall’ and box set. Paul Dillon was Da, who refused to leave Charlie’s mind as he sat and interjected as the past came flooding back with love, exasperation, pride, old-fashioned values about our place in the world.
Conor Hayden was excellent as Charlie, who couldn’t wait to be gone and be rid of the past. He brought a range of emotions to this role to match the luminous performance of Paul Dillon. Fergus Cooper also played a marvellous part as the curmudgeonly Drumm.
Bernie Cullinane brought the love and bluster of Mother to the stage and Joey Molloy was notable as the Young Charlie. Mark Power made his ‘mark’ as the obsequious Oliver.
Dayna Killian created a character with Mary Tate (The Yellow Peril) and Katheryn Curran was a snobbish Mrs Prynne.
Like Charlie, I tried very hard to leave Da at the door but the ebb and throb of memory got to me.
Meanwhile, Waterford Dramatic Society will present the ‘continuation’ play to ‘Da’ – Hugh Leonard’s ‘A Life’, at Garter Lane from 17th to 21st November, as they celebrate 80 years in existence