Lisbon is fast becoming one of Europe’s favourite capital cities. Its location on the River Tagus, its high-level bridges and proximity to the sea at Estoril and Cascais make it a most desirable short break destination.We really were captivated with the capital of Portugal in what was our third visit there in 20 years. While many head for the Belem area to view and take in the discovery memorials, museums and views, but there’s so much more to take in such as the Alfama and Mouraria areas of old Lisbon. 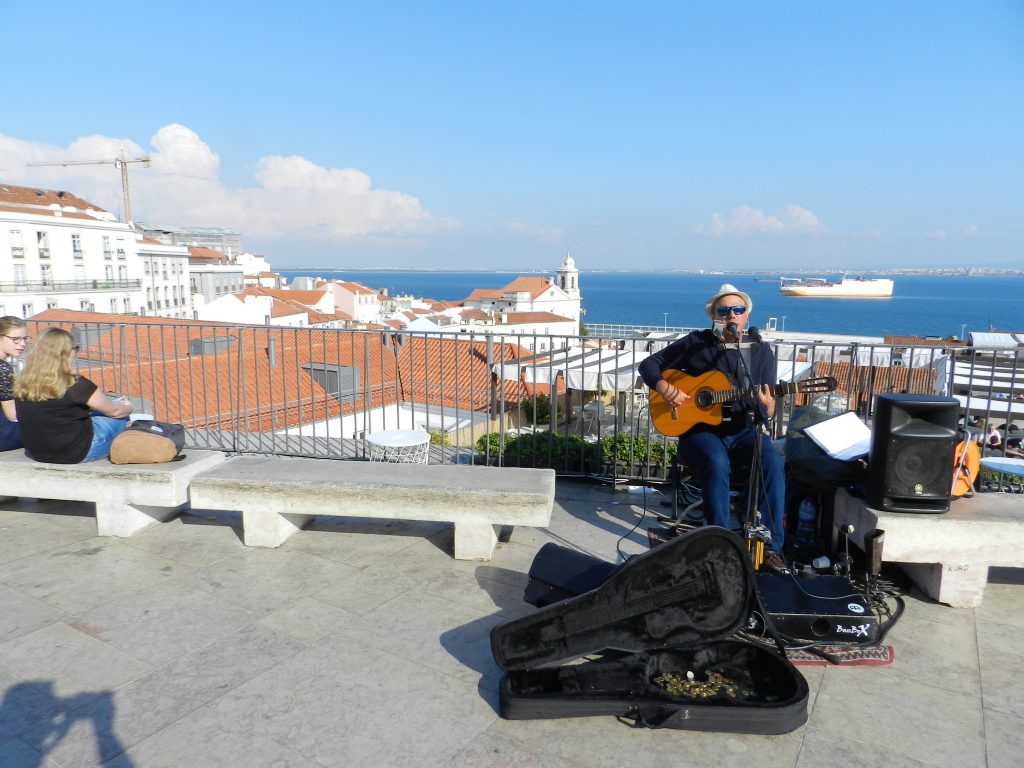 The views from Alfama (Lisbon) are always wonderful.

The large memorial on the Belem Quayside marks the journeys of Vasco de Gama centuries ago and was built over the past 20 years. The explorers’ grave is situated in the Monastery at Belem. The Tower at Belem goes back to the 1600s and saw Irish officers through their doors when with the Portuguese Navy. The country has a major colonial past, taking in Asia, South Africa and South America. It’s also a great place to take pics of the 1960s high level red bridge, a European-style Golden Gate bridge which is now called the April 1974 bridge to mark the birth of new Portugal and the peaceful overthrowing of the Salazar dictatorship.
Nearby also is the great MATT, science museum, which hosts regular exhibitions. The Museum de Berardo de Colcao (close to Belem Tower) is great for modern art, where one can view works by Picasso, Miro, Warhol, Damien Hirst and many more. It tells the story of 20th Century art from the 1920s to abstract and surrealism in a way that cannot be done, we feel, in Dublin. Many school tours were present there during our visit. Lots of young people in the area were using electric scooters as their primary form of transport.
One can also enjoy boat tours of the harbour there or take a public ferry across the river for lunch to Cacahillas. Near the MATT museum, you can go see an old coal power station which now tells the story of power and electricity from the steam age. The coal used here came from Wales way back when; some Irish engineers also get a mention here when it comes to new energy inventions.Pedro Henriques, our guide during our visit in Cascais, told us this area is a must, as did the tourist office. Lisbon features many brilliant art collections at the (Calouste) Gulbenkian Foundation museums, the deceased donor was known as ‘Mr Five Per Cent’ traded in oil like the Gettys and was a very rich man. He died following World War II, was originally a refugee from Armenia and survived both World Wars to live in Lisbon and left behind this huge artistic endowment. This includes billions of Euro worth of art from Ming china to Egyptian pottery, Flemish masters, Rembrandts, Turner, Corot to French Impressionists such as Monet and Manet; we even noted a portrait of a Lady Beresford during out visit. The Gulbenkian Foundation now supports local artists in addition to their study abroad and the museums is well worth an hour or two of your time.

The magnificent Praca Do Comercio in Lisbon.

There’s great shopping to enjoy at Rossio, the Praca Comercio, the Avenida and Restauradores in addition to markets in the city at Figueira Square in addition to a vibrant night life, full of music and dining options. ): We also checked out the Mercado Ribreira Time Out, where famous chefs have outlets for tapas, in addition to many good local wines. It’s a good place to meet friends, but can be quite busy in the summer, when the city heaves with tourists.
This city is best visited on foot; traffic is quite heavy and Lisbon’s older streets can be
very narrow and full of pedestrians. The bus services are excellent, old style trams are magical but the subway is the most efficient for faster travel.We liked eating in the local restaurants near Praca Espana, good value with handwritten menus and bills – no worries about new tech here! Did you know that tea drinking from China was started by the Royals of Portugal and they also lay claim to marmalade jam, something disputed by the Scottish to this day.
We enjoyed our time in Alfama, an old dockside area which is now a tourist honey pot where one can see the Sao Joao Cathedral and Castel. There’s great ice cream worth savouring near its entrance in addition to lovely Lisbon tart pastries.
The Cathedral dates back to the year 1147, Roman remains in the city also survived the
1755 earthquake (brought on by a tsunami) that destroyed the city. We found Alfama really vibrant; it’s packed with neat little houses on streets that are really narrow, where trams whizz by. We dined outside listening to (the UNESCO renowned) Fado music, eating lovely local sardines and chatting with some locals and Dutch visitors; some buskers were playing Leonard Cohen overlooking the river from a church garden area; a Cape Verde band busked elsewhere with women dancing in Afro style.Alfama has not changed in centuries; the locals gaze out at street life from their thin doorways on old style lanes.
It’s great to see their traditions continue. Local groceries shops abound, as do small cafés. Mouraria is similar and getting trendy too while nearby is the Hennessy’s Bar, which is recommended for music and for watching major sporting fixtures. The Praca Figuiera was also good for snacks in the market, most tourists head for Biarro Alto, but somewhere like Alfama is well worth trying out for local food. Other attractions include the coach museum; the Tourist Office told us that they are making continuous improvements, adding attractions.
The Lisbon card gets you discounts to attractions and covers transport costs. Pedro also does Lisbon tours with his pipe fly business Portugal became a democracy in 1974 when the army took over for a short time, having dispense with the dictator Salazar who ruled from the 1930s and kept the country neutral during World War II. In 1975, they introduced a democracy with Portugal joining the European Union within a decade. The Lisboans we met were very friendly and the overall mood of the city, traffic aside, does not leave one thinking you’re in an old royal European capital.
The country has a large colonial legacy with wealth built up from the conquests of Brazil, Macao (near China), Goa (India), Angola and Mozambique in Africa, with one of the more favourable outcomes of that colonial being its contemporary tolerance of many cultures. The city is a melting pot of many nationalities. Waterford and Lisbon’s wine trade goes back to the late 17th Century when the Grant family sent three ships at a time to Lisbon, similar to other Irish and English wine merchants. To this day, Portuguese wine is of excellent quality and is well worth bringing home. A Richard Grant lived here in the Armada days and traded wine with his brother in Waterford, back in the 1600s.

Getting There
The airport is close to Lisbon and you can access the subway with a day pass to get into the city centre in good time – there are also good bus options. We flew with Aer Lingus who have two flights a day all year round, with many business and professionals on the flight we took an early morning departure at 7.50am. Flights costs from Cork to Lisbon are priced between €40 and €60 (a May offer) with Dublin to Lisbon fares coming in at between €80 and €100 midweek.
Accommodation
We stayed at the Praca Espana area where there are many modern hotels. We were based at the comfortable Novotel (€120 for two including breakfast) just a few minutes from
the subway and five stops from downtown/the port. The Eden Hotel has a rooftop pool in the
city centre and is an apart hotel, charging €120 for two.
We also found good self-catering apartments and B&B options for just €80 a night for a
couple or €55 to €65 for a single room in Mouraria near the Sao Jao church (www.palaciovilaflor.com; 351-218870829