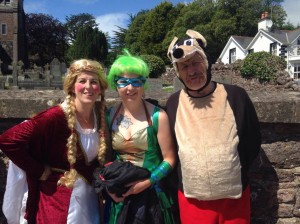 Locals having some fun as extras during the filming of ‘Redwater’.

Series may be broadcast in US
NEW details have been revealed about the upcoming BBC series ‘Redwater’ which was filmed in Dunmore East during the summer of 2016.
The picturesque area of East Waterford is to depict the fictional village of Redwater in the high profile series which will focus on popular ‘EastEnders’ characters Kat and Alfie. 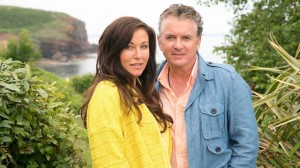 In a recent interview with Lorraine Kelly on ITV’s ‘Lorraine’, actor Shane Richie (who plays Alife) revealed that the series was originally due to be set in Spain.
“But Dominic Treadwell-Collins had an epiphany and said no, we’re going to go to Ireland,” he explained.
Mr Richie told Lorraine Kelly that “the beautiful little village of Dunmore East outside Waterford has become the fictitious town of Redwater”. 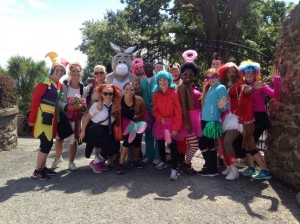 A group shot of local people who appeared as extras during the filming of ‘Redwater’ in Dunmore East.

‘Redwater’ will mark the first time that two characters from a major British soap have been given their own spin-off show.
When asked for details on the show, Mr Richie said: “We’ve got nothing to compare it to. This has never been done before. None of the soaps have taken two characters out and put them amongst others.” 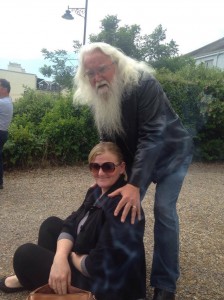 Gino Kavanagh (who is no stranger to being an ‘extra’) pictured with Tracey Hutchinson.

He added: “It’s like putting Kat and Alife into ‘Broadchurch’, with a bit of the ‘The Wicker Man’ thrown in.”
He revealed that no other ‘EastEnders’ characters are mentioned in ‘Redwater’ and no reference is made to either Albert Square or Walford with the exception of the ‘Queen Vic’ which is referred to on one occasion.
The series sees Kat (played by Jessie Wallace) attempting to find her long lost son.
Shane Richie also revealed that his character is only person to refer to her as ‘Kat’ – with all other characters addressing her as ‘Kathleen’. 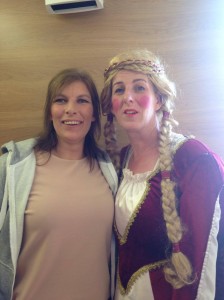 Meanwhile, in a recent interview with the Irish Post newspaper, Mr Richie indicated that ‘Redwater’ may also be shown in the US.
“We’re looking for it to be shown in the States,” he said.
“I can see hundreds of people turning up in Dunmore East – it could be wonderful for the area.”
Huge interest was expressed in the auditions for ‘Redwater’ which took place in Waterford last April.
The first audition was held on Friday April 1st at the Sailing Club in Dunmore East, while the second audition took place at Central Arts, The Quay on Saturday April 2nd.
The ‘Redwater’ drama series has been created by Dominic Treadwell-Collins and is written and produced by the EastEnders team.
Commenting on the series, Mr Treadwell-Collins said: “My team are very excited about creating a whole new drama that stands apart from EastEnders while taking our style of storytelling to a place of stories, myth, secrets and immeasurable beauty.”
He added: “Now is the perfect time to take two of EastEnders’ best-loved characters out of their comfort zone as they head to Ireland to search for answers to some very big questions.”
The much anticipated series also features Irish actresses Maria Doyle Kennedy and Fionnula Flanagan and will be broadcast in six one hour episodes.
‘Redwater’ is due to air in early 2017 on BBC One.