Home » Entertainment » Art & Literature » Oh, For a Theatre By the Sea

Oh, For a Theatre By the Sea

Coastguard Cultrual Centre could tick a big Tramore box
The success of smaller theatrical venues across the locality, be it Central Arts in Waterford city, Gealach Gorm in Kill and Brewery Lane in Carrick-on-Suir begs the question: why has Tramore skipped the board treading beat? It’s incongruous that a town of Tramore’s scale and population does not have a theatre, and the prospect of a venue set against one of the county’s most spectacular maritime backdrops carries great potential and natural appeal. And when considers the regeneration of the Tramore Coastguard Station following the October 2000 fire (which destroyed its interior) into the splendid €3m Cultural Centre and Café in operation since 2004, a theatre there would make an ideal fit. Speaking at the launch of the Tramore Development Trust’s (TDT) ‘Community & Cultural Heritage’ report, Trust Treasurer Louise Grubb pointed to the successful ‘resurrection’ of the Coastguard Station as evidence of what’s possible when capital funding supports community vision.
“It’s fabulous to have a building like this,” Ms Grubb told The Munster Express. “Our whole ethos is to keep it in community use – for the Trust, it represents the jewel in the crown in terms of what’s possible and what can be achieved when a local vision is matched by funding, and the feedback we’ve received from those who visit the building (as detailed in the report) has been incredibly positive.”
While the building is listed and subject to limitations in terms of future development, the TDT is currently engaged with the Sustainable Energy Authority of Ireland (SEAI) on a project which is determining the building’s energy conservation limits. 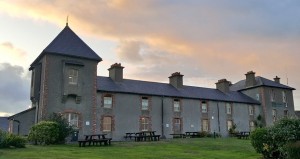 Louise Grubb added: “If we’re successful with that, we could possibly add onto this building in a very environmentally friendly way (potentially a glass framed extension facing onto the seafront) which would allow us to use the building in a more substantial way, and a theatre could form part of that in due course. The whole purpose of this building from the Trust’s perspective is that it retains a multi-functional brief so if we were to get some funding through this (SEAI) project, than we’d go back to the community and ask them what they feel they need here. It’s a beautiful site, but so much more of it could be used.” Given that the centre hosted 54 concerts in addition to 130 exhibitions between 2015 and 2017, developing a small-scale theatre could tick a significant cultural box for Tramore.
“When you take into account where we’re positioned, looking over the bay in a fabulous location in an amphitheatre-like setting so the potential is certainly there. But we need to engage with groups in Tramore about what else we could do should we be in a position to extend this facility and then work with groups to possibly create something else here.”
The prospect of enhancing the centre’s profile and footfall, according to Louise Grubb, could be facilitated by appointing a Programme Manager for a 12-month trial in Tramore.
“I feel a brief like that requires someone giving it their full attention and that’s something which none of us on the Trust are in a position to take on,” she said.
“If we could persuade Waterford City & County Council, the Heritage Council or a combination of bodies to take someone on in such a role for a year to manage a project or a series of projects, working with craftspeople or other community groups, I feel it would be ultimately be self-financing. But we need some support to get this up and running, and I really feel it would be worth it in the long run.”