Black is The Colour…

Moe Dunford on the story we’ve never seen on the big screen before
“It’s the biggest Irish movie I’ve been in so far,” said Dungarvan’s Moe Dunford of ‘Black ‘47’, a film which, remarkably, portrays the Irish Famine for the first time cinematically.
“I always had the feeling that film like this could be a real success (directed by Lance Daly, it went on general release last Friday) and apparently it’s potentially going to be the biggest domestic cinema release for an Irish movie yet, so that’s promising. We can only hope that Irish audiences are going to go and see this and support the movie and I believe they will because people in Australia, Canada, New Zealand, America and of course Irish people at home and abroad have a real interest in the Famine and the history of that terrible time in our history so the initial feedback we’ve received has been pretty promising.” ‘Black ‘47’ tells the story of ‘Feeney’ (played by James Frecheville), an Irish Ranger who deserts his crown uniform to return home to Ireland, where he’s shocked by the reality of The Great Hunger and how it has brutalised both his family and country.
“There have been a few other famine projects floating around,” according to ‘Black ‘47’ producer, Macdara Kelleher. “John Ford was the first person to talk about making a Famine film. Even he never managed to do it.” 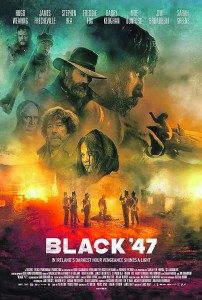 And it struck me as remarkable that the most traumatic episode in Irish history had not been in some manner depicted on celluloid before now. Moe Dunford, whom we last saw on television in the Amy Huberman vehicle, ‘Striking Out’, immediately agreed. “Isn’t it strange that we haven’t seen the Famine as the central event of a movie before now? And you only realise it when you have that fact put back to you and here we are, 170 years on from it. And the reasoning behind why we haven’t seen it addressed through film, I really don’t know. I think it’s a complicated one. Irish people want to see themselves represented authentically and maybe foreign audiences are used to seeing a certain side of Ireland that isn’t always the same type of Ireland that we recognised, because your idea of a quality Irish movie might be different from what an American movie goer might have in mind or, added to that, what their idea of Irish history is. But I think Lance (Daly) and everyone involved in making this movie has gone about addressing the Famine in the right way.”
Moe explained: “It’s essentially a western: an action/revenge tale in the vein of ‘The Outlaw Josey Wales’ (in that spirit, The Irish Times described ‘Black ‘47’ as a ‘potato western’) but it’s set in Ireland against the backdrop of the Famine, and the Famine is such a broad and deeply profound event, the most horrific tragedy on a mass scale in Irish history and there are elements of the Famine in this particular story that we certainly weren’t told about in school, things some of us might have heard about but not necessarily things that were laid down explicitly in our history books – and the English certainly don’t have them in their history books. There are a few good surprises in this film and there’s a good deal of historically accurate detail in there in relation to that period in our history. But yeah, I’m a bit gobsmacked that it’s taken 170 years to put it up there on a cinema screen.” 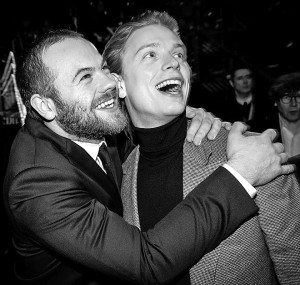 Moe, who plays an RIC Sergeant assigned to track down Feeney in ‘Black ‘47’, hopes the cinema going public will get behind a movie which also features Stephen Rea, Hugo Weaving and Jim Broadbent. “And I’m not just saying ‘support Irish film’ for the sake of it. I’m saying that if this is a success, then many more film makers will get a chance to tell ‘historics’ like this. Irish film, as you know, don’t generally attract or secure major budgets and a lot of movies don’t get financed, so the importance of this movie is huge: I know there a few movies in the pipeline that want to tell other stories about the Famine, so if this is a success, and hopefully it will be, both here and overseas, that will pave the way for more film makers to make their own movies.”
The pre-general release feedback on ‘Black ‘47’, at events including the Berlin Film Festival, has given Moe Dunford and his fellow cast mates cause for optimism regarding how it will fare in front of movie-going audiences.
“The German audience probably didn’t realise the extent of the Famine or even know that much about it,” he said. “I don’t think they recognise the Famine for what it actually was and what it meant for our country. I saw it at a Dublin screening but then I saw it in Galway, and the Galway screening was something special.” Why so? “Well, the Galway people, historically, were among those worst affected by the Famine and, to me, they felt more invested in the story than some of the, shall I say, fancier, red carpet Dublin cinema goers. At the Galway screening, you could literally feel your blood boiling as an audience member, and the film got a standing ovation there. That same feeling was palpable when we brought it to Schull in West Cork, another part of the country which was ravaged by the Famine. The Irish people are really responding to it.” Moe Dunford continued: “Whether you like the movie or not – I wouldn’t go into it expecting all the questions you have about that period in our history to be answered it’s not that kind of film, it doesn’t claim to be – but this is the first time we’ve seen it presented from a frontline perspective. PJ Dillon and Pierce Ryan wrote it, I don’t know, 15 years ago – it’s taken that long to get the film made – and Lance has done a really incredible job in making a taught action thriller that’s set in Ireland. And audiences are really responding to it because we all love a good western. You’re guaranteed a gritty world of realism and action and we’ve got some major movie actors fronting the cast, which is really impressive for an Irish movie. To be sharing a bill with Stephen Rea, Hugo Weaving and Jim Broadbent is a massive thrill for me; these are actors I’ve watched in movies long before I ever got into the business myself.
We shot a lot of this movie in Luxembourg and on my first day on the job, Hugo Weaving strode towards me to say hello. He stooped down – I was sitting at the time – and said “I’m Hugo, how are you?” and he shook my hand, I immediately warmed to the guy because he’s so generous. There were scenes that I was in, and I mightn’t necessarily have had all that many lines, but Hugo wanted to maximise everything for every actor on camera in terms of what we could draw from a particular look and then keep that look in place for the next three scenes so that we’d have a history to build on and use that to build tension to a crescendo where we’d earn it, and that was fantastic for me. He was so, so generous to me as an actor and it immediately relaxed me in terms of getting the job done. It was a fantastic experience for me. Not all leading actors are like that, but he’s a gent.”
So what’s next for Moe? “I’ve just started work on new TV series in Northern Ireland with the BBC, it’s a new crime drama in which I play a detective and I’ll be working on that for the next six months. ‘Vikings’ aside, I’ve never had as steady an acting job as that since I left college to try out this job in the first place and I’m really excited about it. Thankfully there’s good, relevant work coming out of here and some of those stories have had great quality; there’s been a response from film makers because there’s a need to tell stories. To get to work with the BBC is something I’ve always wanted to do and after that, well, I’d love to do an American job one of these days, so we’ll spread the wings and see what happens.”
‘Black ’47’ is now on general release in local cinemas