COUNTY Fermanagh is rapidly cementing its spot as one of Northern Ireland’s must visit destinations.
This beautiful lake filled county has enjoyed a sharp rise in prominence thanks to a world class tourism attraction which has become a social media phenomenon in its own right.The CuilcaghLegnabrocky Boardwalk, located near the border with County Cavan, has attracted huge attention since opening in the summer of 2015. The boardwalk was built with the aim of conserving pristine blanket bog and restoring damaged peatland.However, its tourism potential soon became apparent and it has proved to be a roaring success.The boardwalk leads to a wooden staircase on Cuilcagh Mountain which has been nicknamed the ‘Stairway to Heaven’ and has attracted international attention thanks to the many impressive photographs which have been shared online by visitors. 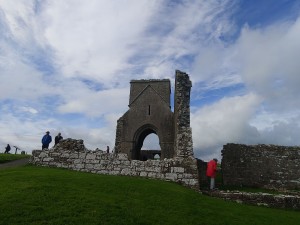 Not to be outdone, I allowed myself time to also capture some impressive photos for sharing on social media and was quite pleased with the favourable reaction! All visitors will certainly be rewarded for their efforts in making the climb to the top as there are hugely impressive views over the surrounding areas including the gorgeous Lough Atona.
After working up an appetite on the 14km round trip, we were ready to feast in one of Enniskillen’s many fine restaurants.
Before dinner, we opted for a visit to Blakes of the Hollow in the town centre which is a famous Victorian pub and home to a popular ‘Game of Thrones’ door. With over 125 years of history, the pub has retained its traditional charm and is a must visit for anyone enjoying a stay in Enniskillen.Café Merlot (www.cafemerlot.co.uk), located below Blakes of the Hollow, is rated as one of the top restaurants in Northern Ireland and has won numerous accolades.
The vaulted setting of the restaurant (similar to Waterford’s La Boheme)is hugely impressive as is the attractive stonework, relaxed atmosphere and, of course, the sumptuous food. During our stay in Fermanagh, we were based at the excellent Belmore Court & Motel (www.motel.co.uk)which is conveniently located for accessing Enniskillen’s town centre and main attractions. There are a number of must see sights such as the famous Enniskillen Castle which is home to the Fermanagh County Museum and the Inniskillings Museum. Additionally, the town’s location between Upper and Lower Lough Erne presents great opportunities for exploring Fermanagh by water.We enjoyed a cruise on the MV Kestrel (www.ernetours.com), which departed from Enniskillen’s Brook Park, and travelled towards Devenish Island Monastic Site which can only be accessed by water. 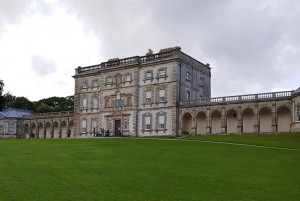 The Monastic Site was founded in the 6th century by Saint Molaise on Devenish, one of Lough Erne’s many attractive islands.
Its history is excellently told in a small visitor centre on the island. There are ruins from different time periods on site including an intricately carved stone cross from the 15th century.The island’s iconic landmark is its 30m round tower which ranks as one of the best examples of such a structure. A visit to Devenish Island will satisfy all age groups and those who aren’t overly enamoured with history will undoubtedly love the island’s scenic location. While in Fermanagh, we also visited the nearby National Trust property Florence Court (www.nationaltrust.org.uk/florence-court) which was recently used for filming the high profile BBC series ‘The Woman in White’.
It’s easy to spend an entire day on the grounds of this fascinating property as there are numerous trails to explore as well as the gorgeous walled garden. We enjoyed a guided tour of the 18th century Georgian mansion and were regaled with stories aboutthe Cole family and their staff.Florence Court was the seat of the Earls of Enniskillen until 1973 and the house and fourteen acres surrounding it were transferred to the National Trust in 1953. Another must see location in County Fermanagh is the Marble Arch Caves (www.marblearchcavesgeopark.com) located at the foothills of the Cuilcagh Mountain.
Words fail to adequately capture the stunning subterranean world which we entered when participating in a hugely enjoyable guided tour.Phrases from geography class came flooding back as we were shown stalactites and stalagmites and learned the fascinating history behind the explorations of the cave which were carried out by French man Edouard Alfred Martel.
Our visit to Fermanagh was truly eye opening and allowed us to explore some of the highlights of this gorgeous county.
Fantastic Fermanagh looks set to continue its rise as a top tourist destination so ensure a visit is something that happens in the near future!
Visit www.fermanaghlakelands.com for accommodation, special offers, events and what to see & do in the area.