The Eigse Players bring their own special brand of madness and mayhem to the Parish Hall in Slieverue for three nights from Thursday 19th – Saturday 21st March starting at 8.00 p.m.
This year’s hilarious comedy ‘Hitting the Jackpot’ tells the story of County Councillor Eamon Leslie, who at the end of his tether from his widowed mother Bridie, snooty wife Doreen and unpleasant constituents, strikes it rich by winning the lotto only to lose the ticket in the home of neighbours, the Hunts. 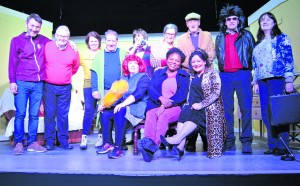 Unfortunately, Doreen has just had a major row with Biddy Hunt and so retrieving the ticket becomes a task that will test their connivances. Things are further complicated by Biddy’s secret passion for the bold Eamon. And has he really lost the ticket or has somebody else got it? Written by Jimmy Keary, the play is directed by James Rockett and stars Paddy Drennan as Eamon, Marley Irish as Doreen, Oonagh Harney as Bridie and Joan Aylward as Biddy. Also starring in the cast are Funkie, Maria Ronan, PJ Irish and Jim Dunne. Just the ticket for these dark nights—be prepared to laugh yourself silly