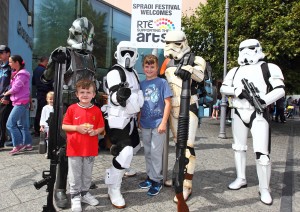 This year, Spraoi turned Waterford into an urban fairground attraction with sights and sounds to heighten expectation and wonder. There was allure, music and the unexpected around the corner.
If you were in Gladstone Street, you wondered what was going on John Roberts Square and people telling you: “Ya ‘shudda’ seen the aerialist Queen in Palace Square”.
There were hot dogs and circus acts, fire twirlers, and dancing clippies giving out tickets for fantasy rides in wartime, singing Goodnight Sweetheart, or jugglers quoting Jim Morrison of The Doors in French.
To go from one attraction to another was to meet old friends, share a laugh, admire a baby, sample a delight and be at home in a place of special wonder. There was a lot of monkey business, a clatter of fireworks, some wet weather and lots of new-minted memories.
Friday: Friday night was relatively quiet. Tommy Ryan was setting up barriers, and Adrian Dower said he wasn’t cold in his tee-shirt. Monkey A and Monkey B from Spain were doing somersaults over a Mini Cooper outside Supermac’s.
On The Mall a French act – Cirque Exalte, a trio in ordinary dress; dancing, juggling, flirting in French and English and slowly (too slowly) building up over 40 minutes to a spectacular trapeze act.
Their show ‘Furieuse Tendresse’ was neither furious nor tender, but it was a fine preamble for a Circus and Street Theatre Company – ‘Passe Partout with Inferno’, that set out to ignite the imagination as darkness fell. There is a primal attraction to fire, and the audience loved the graceful and almost hypnotic build-up to a furious and fiery conclusion.
Saturday: Saturday was glorious, not too hot, not too cold, and the crowds thronged the streets. Crazy characters passed by on their way to Pied Piperland. Strange accents, the inviting smells of food, dare devil may care fun to be young and young at heart.
Alex Gough and his friends from the exciting Waterford Academy of Music and Arts in ‘The Big Bang’ made pumping percussion.
It was hard to sit still for Moxie Brawl a contemporary dance company mingling and weaving through the crowd to stage ‘Sit Back’ with a prop seat.
This was a beautiful and expressive experience as clippies dispensed tickets for an imaginary Trolleybus ride through a wartime London street where a bread and jam sandwich was a glorious treat and an apple, almost a ‘sinful pleasure’. I love the grace and fluidity of contemporary dance, and it was such a buzz to see a large audience enjoy a thoughtful and expressive show.
This was choreographed by Sarah Blanc, who came up through the ranks at Waterford Youth Arts and went to London to work with Candoco Dance Company, who work with able and disabled dancers.
Highlight of that afternoon was ‘Circus Jukebox’ from Fanzini Production with a bright, colourful and costumed ‘greatest circus hits’, where the audience made choices for acts such as crazy clowning, juggling, an aerialist on a Chinese Pole, madcap acrobatics and polished routines that wowed the crowd. Sam Hodge’s eyes widened in wonder and his little sister Grace slept through it all.
Sunday Parade: It rained, it drizzled, it poured, but it did not dampen (too much) the enthusiasm of an audience for the spectacle of a parade – ‘The Origin of the Species’.
A masquerade of monkeys went bananas, with a cinemascope of chimps, outrageous orangutans, cute chimps, crazy chimps, grizzly gorillas and a few scary simians.
With costume design by Clare Horgan assisted by Denise Colbert the Casting Coordination was done by Shauna Farrell and Deirdre Jordan who must have encouraged ‘acting the ape’. Out the menagerie streamed up Johnstown with Scientists like Brendan Doherty and his children, Jessie-Ellen and Thomas as little monkeys. Ema Lemon was a Senior DNA boffin, and Julia Kelly was a minion of DNA while her mother Zandra Kelly was the ‘damsel in distress’ in the paw of King Kong. She screamed and screamed in a way that would have pleased creator Edgar Wallace.
As monkeys scampered and amused the umbrella audience, Padraig O’Griofa strutted as director while John Thompson was a grave cameraman. Andrew Macklin was ‘a H-actor’ with Shakespearian tendencies with a clatter of typewriting monkeys. There was a live band, Kelly and the Kapowskis, and Rob O’Connor directed the music.
There were Space monkeys and Money monkeys trading with bananas as currency in the Republic of Spraoi, as some on the ‘floats’ bailed out more magic and good times.
Amid the morass of monkeys was Wayne Brown the AIMS Best Musical Director as the ‘Orrible Organ Grinder. Could he have been swinging in the rain as Duracell monkeys showed no sign of running out of energy?
Brian Coady was a thespian Tarzan looking frantically for his pet chimp Cheeta.
The fireworks brightened up more than the night sky, and it was Spraoi magic once again. Long may they reign.